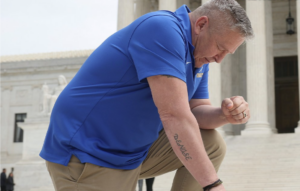 The Supreme court ruling in favor of coach Joseph Kennedy speaks to the legitimacy of the 1st Amendment when it states that, “Congress shall make no law respecting an establishment of religion or prohibiting the free exercisethereof; or abridging the freedom of speech, or of the press; or the right of the people peaceably to assemble, and to petition the Government for a redress of grievances.” The lower courts had denied Joseph Kennedy his right to assemble peaceably, his right to freedom of speech, and his right to exercise his religion. In correcting this ruling, the Supreme court has affirmed the boundary that when an individual is not on duty at his employment, he is at liberty to practice his faith and pray as he or she chooses. While the school district argued that he was still on the ball-field, the Supreme Court rejected that argument because praying on a ball-field is not illegal in this country yet. Many argued that he would have forced other students to participate by exercising his right to pray, but this was not the interpretation of the Supreme Court since Coach Kennedy did not require participation nor did he require a student to pray. This looks and feels like a victory for free speech and religious liberties in America but will not likely pave any roads to return prayer to schools, as that is a battle for parents and local citizens to tackle with local elections and school boards.

The Supreme Court ruling in favor of Coach Kennedy’s rights to pray and exercise his right to free speech is a huge victory for our country at a time when religious liberties and free speech have been greatly under attack. 2ndVote would like to thank the Supreme Court for correctly interpreting the 1st Amendment and correcting this injustice to Coach Kennedy. We rejoice whenever liberty reigns in our land.

May God continue to bless America!