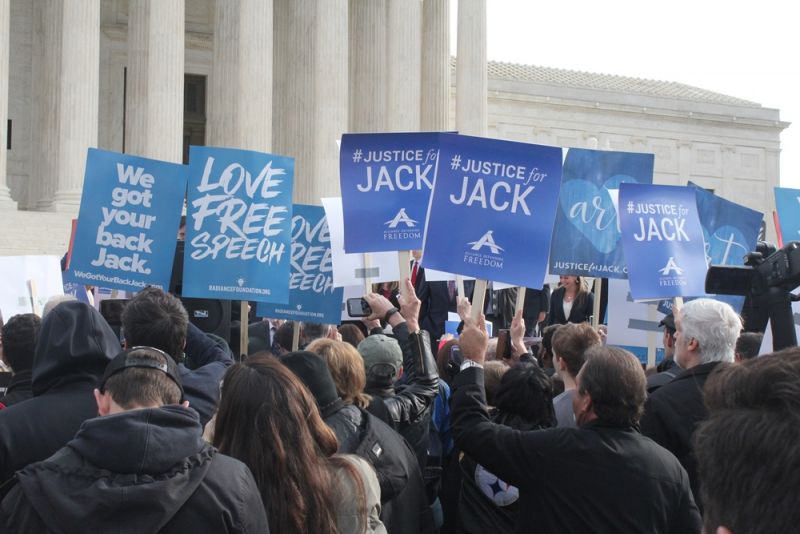 The Supreme Court of the United States heard oral arguments this week in the case of Masterpiece Cakeshop v. Colorado Civil Rights Commission.

Jack Phillips, the owner of Masterpiece Cakeshop, is fighting for his livelihood and the right to operate his business according to his faith, but his case has important ramifications for all Americans. He is in this position for merely declining to use his artistic talents to create a cake for a same-sex wedding, an act that would undermine his belief in marriage existing between one man and one woman as ordained by God.

Because of his stand, the same-sex couple who requested the cake filed a complaint with the Colorado Civil Rights Commission. As a result, the commission ruled Masterpiece Cakeshop would have to start fulfilling orders for same-sex wedding cakes and mandated a “re-ducation” program for Phillips and his staff.

Sadly, the Masterpiece Cakeshop case is not an isolated incident. As we’ve seen with other cake bakers in Oregon and florists in Washington, the radical LGBT lobby will use the legal system to bully those who don’t agree with their agenda. The outcome of Phillips’s case is critical for the 1st Amendment’s protections for speech, expression, and faith.

However, many major corporations are standing against the 1st Amendment. 37 corporations have signed an amicus brief asking the Supreme Court to rule against Masterpiece Cakeshop and mandate business owners give up their religious beliefs when it comes to the operation of their business. The brief which was organized by the leftist Human Rights Campaign can be viewed here.

Here are the 37 corporations standing against Jack Phillips and the 1st Amendment:

Be sure to click the links to see the company scorepages and reach out to these companies to tell them to stop attacking protections for religious liberty.

Help us continue educating conservatives on the companies attacking protections for religious liberty by becoming a 2ndVote Member today!