Can Operational Metrics for ESG Be Done Fairly?

24 May Can Operational Metrics for ESG Be Done Fairly?

Elon Musk is right about ESG. It is a scam designed to force companies into a social score that has little to do with their sincere efforts in environmental stewardship, social leadership, or governance authenticity. The entrepreneur and business leader doesn’t pull his punches and seems to enjoy the Twitter banter (whether he ends up buying it or not). Yesterday Musk tweeted his disdain for ESG initiatives, pointing out the irony of an oil company earning a higher ESG rating than an electric car company. He’s not wrong; the left hates the oil industry and seemingly worships the alternative energy industry (unless their name is Tesla). 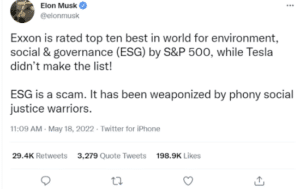 In fact, he is right. The irony seems almost satirical. ESG is presented as the all-encompassing plan for bringing the entire corporate world into submission to a vaguely defined requirements that seem to actually work to subvert the powers of investors, leaders, and even governments toward some new world order concept that doesn’t really care about any of the elements of ESG in the first place. The powers that be – whatever that means for something as ominous as a set of concepts that have been redefined more frequently than gender – are progressing in their efforts to distract corporations from their core business and their shareholder obligations.

If the left gets what they want, every corporation will be required to redirect all resources to environmental extremism, social (read socialized) adoption of unnatural ideas, and C-suites that fall on the sword for not being extreme enough. How do we know this is true? When the S&P 500 kicks Tesla out of their ESG listing because their Carbon Footprint plan isn’t impactful enough, you cannot deny that the wackos are in charge. Tesla is building giga-factories to eliminate most of the logistics required in production, is building the most popular electric vehicles in the world, is advancing the development of rechargeable batteries for the next generation and is developing some of the most advanced raw material sourcing solutions in industry. It would be difficult to have a better carbon footprint than Tesla. So when Musk says ESG “has been weaponized by phony social media justice warriors” he’s right. Leftists in the federal government and many of their puppet controllers in the special interest space are pushing an agenda that has little to do with protecting the environment or promoting good business practices.

The concept of including environmental stewardship, community leadership, and governance authenticity as key performance metrics in a business is not a bad plan! There is no reason that can’t be done well. Fortunately the supposed powers that be are so busy pushing for compliance that they haven’t effectively decided on a unified set of standards. What all is included in Environmental Stewardship? Does Social Leadership really need to require diversity beyond diversity of thought and experience? Can governance authenticity celebrate personnel success at every level including compensation and rewards? Absolutely.

Environmental Stewardship can and should be an integral part of corporate operations. We live in a land of vast opportunity, and caring for the resources we have is not just important for shareholders; it’s important because we must maximize the talents that we have been given. Minimizing waste has been a Lean Manufacturing initiative since the 1930s and formally here in the US since at least 1988. Developing and utilizing renewable energy and minimizing energy consumption is an obvious way to help businesses grow and minimize expenses. Innovating in every aspect of operations has been a core driver of American success since the industrial age, and the pace is only picking up. So yes, improving how we use resources and minimizing negative impacts on the environment is indeed a valuable use of corporate resources.

Social Leadership is another key element of useful and viable models that help the business and the community. While those on the left tend to use the Social factor to push “equity” and affinity toward hiring and promoting people based on immutable characteristics or how they chose to identify or express themselves, they end up losing profitability and creating corporate cultures that destroy themselves from within. The idea of enforcing quotas on race, gender, sexual orientation, or any other protected status is contrary to the need to promote diversity of thought. Instead, corporations have proven that they can be more successful – and even more fair – by judging people by the content of their character instead of their protected status. Just recently the short-lived California laws mandating corporate boards include women and other ethic specifications were stricken down as unconstitutional. Instead, corporations should be promoting fairness, integrity in management, safe working environments, and proper vetting of vendors and partners.

Governance Authenticity builds even more on solid, proven business practices. History tells of countless organizations where governance was kept behind closed doors, but also of many organizations where governance was made clear and open. Corporations should and must be able to maintain proprietary secrets and conduct business that is intentionally beneficial to their shareholders without having every action painted as a conspiracy. On the other hand, generally accepted accounting practices, published corporate policies, advocacy that is grounded in the values of the company, and proper disclosure of publicly accessible information all help to promote trust in a company’s leadership. Employees, shareholders, customers and other stakeholders generally see through the marketing to decipher when corporate leadership is authentic in their practices. Programs that help to ensure that authenticity can and should be done well.

The question then becomes: who should define the standards for ESG in American companies? The answer is simple. The leaders and shareholders of each company must define the values of the company, and must then define the operational metrics based on those values. If a corporation chooses to embrace socialist ideals and to turn control of their operations over to unelected government bodies and social justice warriors, they have every right to do that. If they prefer to define their values based on American traditions, Judeo-Christian values and the interests of building the best products or services available, then they must retain control of their operational metrics internally. Sure, they must also be compliant with federal and state regulations, and may also refer to industry best practices. Note that relinquishing control of internal management to any outside body should never be the standard.

So yes, most ESG initiatives today are indeed a scam designed to destroy corporations, play favorites for the most woke executives, and place socialized controls over effective governance. But no, it doesn’t have to be that way. 2ndVote analyzes the critical elements of ESG based on American traditions of success, with an emphasis on policies, advocacy and philanthropy. These are just some of the key indicators of proper alignment of leadership and operations to corporate values. Check back for more on what American traditions play the greatest roles in effective ESG.