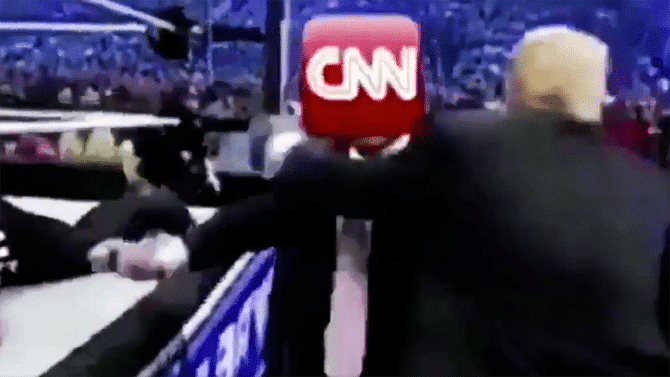 CNN was body-slammed in more ways than one this past week.

Sunday morning, President Trump tweeted out an anonymous Redditor’s video depicting the President body-slamming someone with CNN’s logo superimposed over his face. An infuriated CNN threatened to reveal the creator’s identity spurring a public backlash due to the overreaction. “The Most Trusted Name in News” has been in a tailspin ever since.

The rating for CNN’s app at the Apple Store dropped all the way to a 1 and according to The Federalist, “Last week, more Americans tuned in to watch re-runs of ‘Yogi Bear,’ ‘Full House, and ‘Friends’ on Nick At Nite than to watch Anderson Cooper and Don Lemon’s shows on CNN.”

It seems CNN is more concerned these days with pushing the left’s agenda rather than reporting truth and facts. You may remember that CNN’s parent company Time Warner recently chose to remain a sponsor of a Broadway play that depicts the assassination of President Donald Trump despite other companies bowing out.

CNN scores a 1.7 (Liberal) according to 2ndVote’s research with the lowest possible ratings on the Environment, Marriage, Immigration, and Religious Liberty issues. Based on the positions CNN has taken, leadership within the company may need to change its approach, or viewers may continue choosing reruns over “The Most Trusted Name in News.”