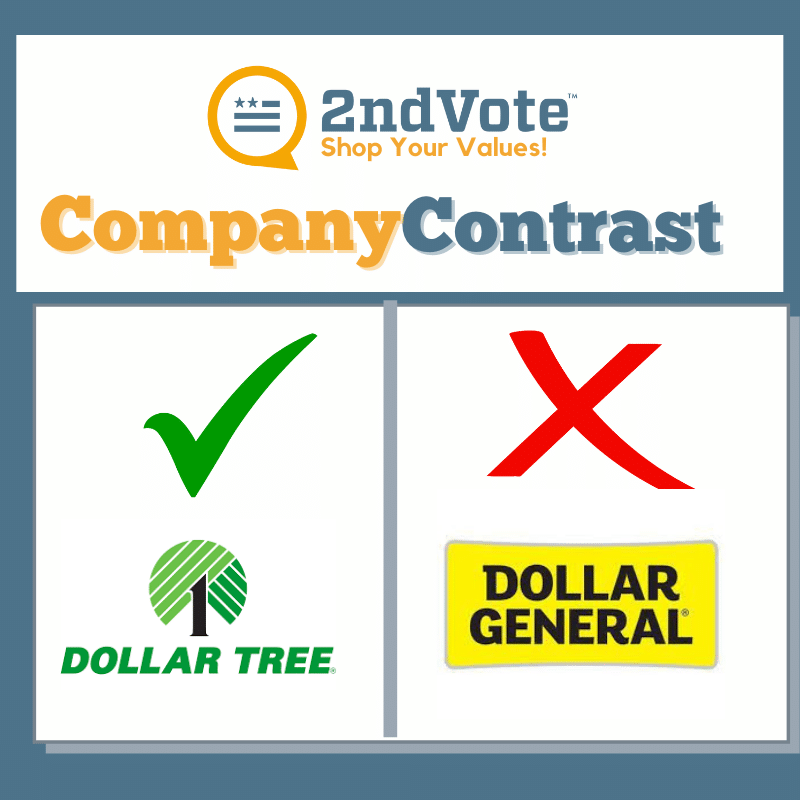 Posted at 10:00h in Basic Freedoms, News by 2ndVote

Each week 2ndVote takes a look at popular companies that either score well or score poorly  and then try to provide alternatives that either better align with the 2ndVote values or should be avoided to the best of your ability. This series is called The Company Contrast, and the company we will be focusing on this week is Dollar Tree, Inc. (3.05) and Family Dollar (3.00).

Founded in 1986 by partners Doug Perry, Macon Brock, and Ray Compton, Dollar Tree, Inc. was originally known as Only $1.00, until a rebranding in 1993. After experiencing steady growth throughout the mid-90’s to early-2000’s, Dollar Tree, Inc. eventually also acquired Family Dollar in 2015, adding it to its chain of dollar stores across the country. Although they still aren’t quite as large as their chief competitor, Dollar Tree, Inc. and Family Dollar serve as examples of companies that have chosen to stick to their business and stay clear of divisive political and social activism like so many other American corporations nowadays. To the extent that 2ndVote was able to find philanthropic information on the two companies, both have remained relatively neutral on issues across the board, with Dollar Tree, Inc. having some modest activism like an environmental policy that demonstrates stewardship.

On the other hand, the nation’s largest dollar store chain, Dollar General (1.50), is quite active in the realm of leftist agenda support. Various donations to organizations that oppose religious liberty protections and support sanctuary cities, just to name a few, raise cause to avoid shopping at Dollar General whenever possible.

As always, do not be afraid to use your voice and call out Dollar General for their woke culture by contacting them directly using the link here. We also want to commend Dollar Tree, Inc. and Family Dollar for standing up for our American values, so feel free to reach out and pass along a job well-done with these links here: Dollar Tree and Family Dollar.