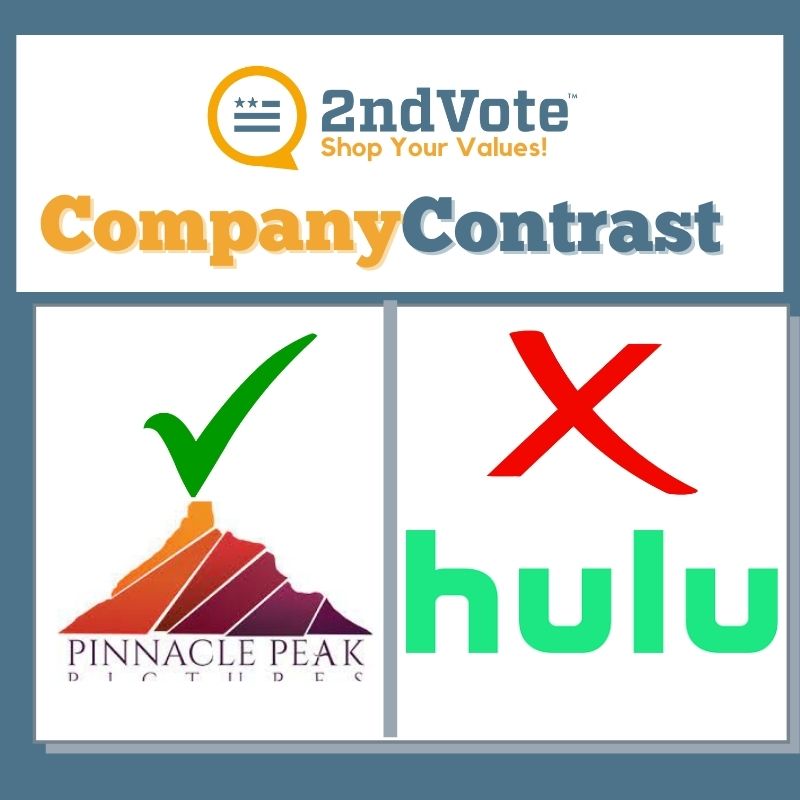 Each week 2ndVote takes a look at popular companies that either score well or score poorly  and then try to provide alternatives that either better align with the 2ndVote values or should be avoided to the best of your ability. This series is called The Company Contrast, and the company we will be focusing on this week is Pinnacle Peak Pictures (3.73).

Formerly known as Pure Flix, Pinnacle Peak Pictures was recently rebranded following their acquisition by Sony’s subsidiary, Affirm Entertainment. Despite the acquisition and rebranding under the Sony (2.00) umbrella, Pinnacle Peak Pictures is well known for their conservative views that are founded in their Chrisitan faith. Probably known best for their blockbuster movie series, “God’s Not Dead,” Pinnacle Peak Pictures’ streaming service, still using the Pure Flix name, offers an entire library of faith-based films and tv series, for a variety of individual and family audiences, that promote traditional values like pro-life stances and Christian faith. However, their offerings don’t stop at just films and entertainment. Part of Pinnacle Peak’s repertoire includes an entire homeschooling curriculum that features educational videos and movies that help parents and families ensure their children’s education and faith aren’t forcefully separated by national or state standards. Additionally, Pinnacle Peak’s stance on supporting legal immigration avenues and laws means the streaming company earns points on the 2ndVote issues of Life, Basic Freedoms, Civil-Safe Society, and Education.

On the other hand, a couple of the mainstream streaming services to avoid include Netflix (2.28) and Hulu (Comcast – 1.33). Not only do both of these companies score poorly on the issues of Life and Basic Freedoms for supporting pro-abortion and anti-religious liberty organizations, but Hulu’s parent company, Comcast, earns the lowest possible scores on almost every other issue as well.