Each week 2ndVote takes a look at popular companies that either score well or poorly and then tries to provide alternatives that either better align with 2ndVote values or should be avoided to the best of your ability. This series is called The Company Contrast, and the company we will be focusing on this week is 7-Eleven (3.63). 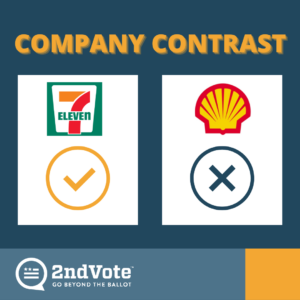 Whose gas should you buy? 7-Eleven vs. Shell

Being that gasoline is one product millions of Americans use every day, there are many options out there for filling up their tanks (or at least as much as possible these days.) One great option is 7-Eleven. Well known for being a solid brand in the oil/convenience store industry, the company has high marks from 2nd Vote in the areas of Basic Freedoms and Civil/Safe Society. They participated in the 2021 Salvation Army Angel Tree program and contributed to many veteran support/service organizations. 7-Eleven was also recognized as one of the Top 100 Military-Friendly Employers by VICTORY Media (GI Jobs) from 2014-2021.

One company to steer away from, though, is Shell (1.00). Coming in as the lowest scoring oil company, Shell has directly contributed to Planned Parenthood, is a corporate sponsor of the Human Rights Campaign (HRC), and received a score of 100 on HRC’s Corporate Equality Index. They have also donated to organizations that support sanctuary cities and Common Core education standards.

So, when it’s time for your next fill-up, whether it be for you or your car, head to 7-Eleven. And you can enjoy a Slurpee knowing that your purchases there are clearly supporting America’s values.