Each week 2ndVote takes a look at popular companies that either score well or poorly and then tries to provide alternatives that either better align with 2ndVote values or should be avoided to the best of your ability. This series is called The Company Contrast, and the company we will be focusing on this week is Academy Sports & Outdoors, Inc. (3.81). 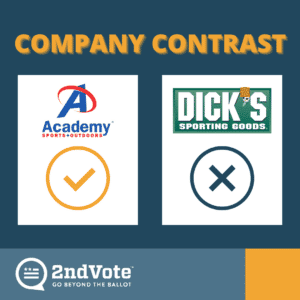 With the school year picking back up, many parents and students will be gearing up for the coming fall sports season. Likewise, hunters around the country will be preparing for their local deer, turkey, duck, or any other hunting season. Fun activities like these will require an assortment of cleats, baseball bats, football pads, bows, arrows, ammo, and more. Fortunately for 2ndVote shoppers, Academy Sports & Outdoors offers all of these products with none of the liberal activism du jour of their competitors. Despite remaining neutral on Life, Academy Sports earns Conservative points on all other key issues. Hundreds of thousands of dollars donated to organizations dedicated to supporting law enforcement and first responders, as well as teachers, means that Academy Sports earns perfect scores on Civil-Safe Society and Education. Following close behind, their next highest score is on Environment for their partnerships with prominent conservation organizations. Lastly, they earn modest conservative points on Basic Freedoms for utilizing a merit-based hiring policy in lieu of DEI (Diversity, Equity, & Inclusion) policies, as well as on the 2nd Amendment for promotion of firearms safety, training, and responsible ownership. All of this culminates in a retailer that, while not strongly Conservative, offers quality products with values that don’t break the moral compass!

On the contrary, Dick’s Sporting Goods, Inc. (2.01) seems to have lost its way to the Leftist sway. First and foremost, Dick’s Sporting Goods has joined one of the worst crowds and instituted abhorrent abortion tourism, aka abortion trafficking, policy in which they are offering to reimburse travel expenses for employees that seek abortion services out of state, following the recent Roe v. Wade ruling. This justly results in an automatic 1.00 on Life. Despite having a few thousand dollars donated to Christian organizations, Dick’s adherence to the HRC’s Corporate Equality Index criteria, and their participation in the CEO Action Pledge for Diversity and Inclusion overwhelm their Basic Freedoms score. Similarly, their adherence to the United Nations Sustainable Development Goals metrics heavily impacts their Environment score for promotion of alarmism. With the 2nd Amendment being perhaps their most active issue, Dick’s Sporting Goods is no friend of the right to bear arms. Since 2019, Dick’s Sporting Goods has removed firearms from the shelves of over half their stores and proceeded to destroy over $5 million worth of semi-automatic rifles in response to the Parkland School shooting, and have been a signatory on two separate corporate letters to Congress calling for gun control policies like universal background checks and red flag laws. Really, the only saving grace for Dick’s is a few thousand dollars that they’ve donated to a handful of local police foundations, earning a few points back on Civil-Safe Society. All in all, Dick’s Sporting Goods serves as a perfect example of yet another company caving to Leftist agendas.