Posted at 10:16h in Company Contrast, Issues, News by 2ndVote

Each week 2ndVote takes a look at popular companies that either score well or poorly and then tries to provide alternatives that either better align with 2ndVote values or should be avoided to the best of your ability. This series is called The Company Contrast, and the company we will be focusing on this week is Ace Hardware (3.61). 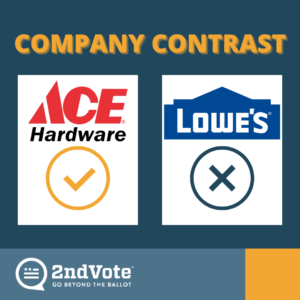 With summer in full swing, many people are using this time to work on home renovation projects! Here at 2ndVote, we know how important it is to spend your money where your values are met. That is why we recommend going to Ace Hardware to find materials to finish those home improvement projects! Based in Oak Brook, Illinois, Ace Hardware was founded in 1924 as “Ace Sores” but was later rebranded as “Ace Hardware Corporation” in 1931. The company was named after the famous Ace Fighter Pilots of World War 1. Ace Hardware has had major success over the years, becoming one of the largest non-grocery stores. That is not the only reason we recommend them! The home improvement store gets a rating of 3.61. Receiving this score from their support of veterans and owning various franchise locations that sell firearms and ammunition. Their most notable action is their significant donation to the Children’s Miracle Network, which specializes in child healthcare. Ace Hardware will not only supply you with the materials you need for those projects, but they will align with your values! Search “Ace Hardware” in company scores and check out why they score a 3.61 with us and even send them an email to show them you support their values!

A well-known home improvement store that we advise consumers to avoid is Lowe’s (2.06). The company was founded by Lucius Smith Lowe in 1921 with its first location opening in North Wilkesboro, North Carolina. Lowes is one of the largest hardware chains in America. However, we advise you to spend your hard-earned money where your values are met. Lowes scores a 2.06 for some major reasons. The hardware store partners with liberal corporations that support cap-and-trade and the carbon tax. The corporation has also scored a perfect score on the HRC’s Corporate Equality Index over the last few years. The home improvement store also includes a CRT- based employee training program that is sponsored by the United Way of Central Carolinas. Don’t look left when searching for the best materials for your home improvement projects. You can contact Lowes via social media, to advocate why they should align with traditional American values!