Each week 2ndVote takes a look at popular companies that either score well or poorly and then tries to provide alternatives that either better align with 2ndVote values or should be avoided to the best of your ability. This series is called The Company Contrast, and the company we will be focusing on this week is Activision Blizzard, Inc. (4.15). 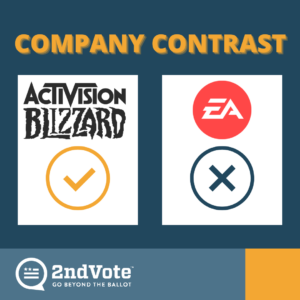 As an avid gamer, it rarely occurred to me to consider the values of publishing studios from which my favorite games came. Often, the most important thing for gamers is simply the content or franchise of the game they are interested in, and few likely ever give any thought to what causes or values they may be supporting with their purchases. However, like any other corporation, game developers and publishers are not exempt from trends of philanthropy or “stakeholder” capitalism.

Fortunately for fans of games like World of Warcraft, Call of Duty, and classics like Spyro and Crash Bandicoot, Activision Blizzard has demonstrated itself to reliably align their philanthropy with organizations that are 2ndVote approved. First and foremost, a single donation of hundreds of thousands of dollars to The Salvation Army ensures positive points on Life and Basic Freedoms, despite one of the company’s few negative points being a score of 100 on the HRC CEI. Most notably, Activision Blizzard is heavily involved in veteran and first responder assistance. With over a dozen donations, valued at over $5 million, to organizations that provide support, training, and placement for careers to veterans, Activision earns high marks on Civil-Safe Society and is one of the most pro-veteran companies in our database. Additional minor support STEM education programs also earn them points on education.

As one of their chief competitors, Electronic Arts, Inc. (1.77) firmly places itself on the complete other end of the spectrum compared to Activision. While Activision doesn’t have a large number of scoreable actions on record, the few actions they do have are demonstrably leftist and include a score of 100 on the HRC CEI, and most critically, an abortion trafficking policy in which the company will pay for or reimburse travel and/or operational costs for employees to travel out of state for an abortion.