Each week 2ndVote takes a look at popular companies that either score well or poorly and then tries to provide alternatives that either better align with 2ndVote values or should be avoided to the best of your ability. This series is called The Company Contrast, and the company we will be focusing on this week is Booking Holdings (3.00). 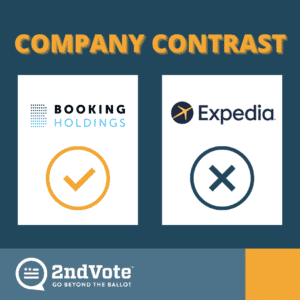 Booking Holdings owns and operates several travel fare aggregators. These online tools for preparing for travel include booking.com, Priceline, Agoda, Kayak, and more. The company was founded in 1997 when Jay S. Walker started company and launched Priceline.com. Today the company books over 590 million rooms for customers. Booking Holdings scores a neutral 3 with no scorable actions found in the research. Give Booking.com, or one of their other websites a try the next time you’re planning a trip.

This is in stark contrast to Expedia Group (1.52). Expedia was founded as a division of Microsoft in 1996 and then spun off into a public company in 1999. Today Expedia Group operates Vrbo, Hotels.com, Hotwire.com, Orbitz, Trivago, and Travelocity. The research puts the company’s score very low. They earned the lowest scores possible in Life, Basic Freedoms, and Civil Safe Society. These actions include Reimbursement for travel to get an abortion, earning a 100 on the HRC corporate equality index, and donating to groups that support sanctuary cities. Expedia Group is involved in liberal activism with a high number of scorable actions. Give alternatives like Booking.com a try before you fly to your next destination.