Each week 2ndVote takes a look at popular companies that either score well or poorly and then tries to provide alternatives that either better align with 2ndVote values or should be avoided to the best of your ability. This series is called The Company Contrast, and the company we will be focusing on this week is Chick-fil-A (4.13). 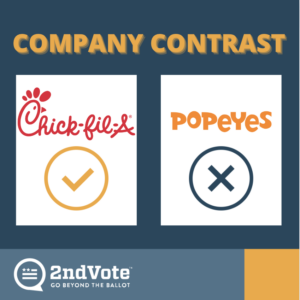 Perhaps one of the most controversial companies in the 2ndVote database, Chick-fil-A has gone through a plethora of changes over the last few years, many of which seemed counter to the very values that the company was founded on; values that their regular customer base was proud to support. Following a wave of woke ideology in 2019 and 2020, Chick-fil-A came under fire for major shifts in their philanthropic endeavors. Previously long-time supporters of The Salvation Army and the Fellowship of Christian Athletes, Chick-fil-A succumbed to pressures to cease their charitable donations to the Christian organizations on grounds of them being “homophobic” or anti-LGBTQ. As a result, the fast-food chain halted those donations in lieu of supporting organizations that, at the time, seemed to be pro-LGBTQ, subsequently dropping their score below the threshold for 2ndVote to support them.

Through rigorous re-evaluation, Chick-fil-A eventually earned its points back, albeit not by reinstituting its philanthropy to FCA and The Salvation Army. Rather, a coinciding re-evaluation of the Covenant House found that the nonprofit was not a major actor in the LGBTQ agenda, but is actually quite active in fighting human, child, and sex trafficking around the world – by extension, earning Chick-fil-A points on Life. Additional support for different Christian organizations, as well as STEM education programs eventually brought the chicken specialist back up to a respectable 4.13 overall.

On the contrary, Popeyes Louisiana Kitchen (owned by Restaurant Brands International – (2.35)) has mixed scores on various key issues. In particular, Popeyes’ parent company has made moderate donations to a United Way chapter that supports Planned Parenthood, has earned a score of 95 on the HRC Corporate Equality Index, and openly supports environmental alarmism, resulting in a loss of points on Life, Basic Freedoms, and the Environment. While they may not be as egregious as many fast-food chains, their actions certainly warrant reaching out to them through the 2ndVote website to make sure your voice is heard!