Posted at 13:24h in Basic Freedoms, News by 2ndVote

Each week 2ndVote takes a look at popular companies that either score well or score poorly  and then try to provide alternatives that either better align with the 2ndVote values or should be avoided to the best of your ability. This series is called The Company Contrast, and the company we will be focusing on this week is CVS Health Corporation (3.42). 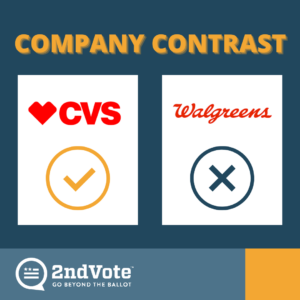 Originally founded in 1963 as a chain of health and beauty aid stores, CVS eventually added pharmacies to its stores, becoming what most people recognize as one of the largest pharmacy chains in the country. Although CVS Health Corporation has expanded into other areas like pharmacy benefits management with CVS Caremark, and health insurance with Aetna, its retail pharmacy stores remain the face of the company. For consumers, CVS offers one of the only alternatives to other major competitors, and largely liberal activists, like Walgreens. In fact, CVS scores well on the issues of Life and Basic Freedoms due to a slew of donations. Despite their record containing a mix of some liberal donations, the majority of CVS’s socio-political contributions trend toward conservative organizations, most of which are either Christian, faith-based organizations, or non-profits that are pro-life and/or work in family planning and adoption.

However, due to some concerning changes in CVS’s training policies, 2ndVote has begun a campaign to amplify consumer voices in demanding that CVS stop straying down the woke path. Recent reports show that CVS has committed $600 million to advancing new employee training programs that are pulled straight from the CRT playbook; using terms such as “unconscious bias” and “conscious inclusion training”. So please check out the 2ndVote campaign to put CVS on notice and reach out to them through our website!

Unfortunately, despite CVS’s recent wrong move, they’re liberal activism pales in comparison to their nearest competitor, Walgreens (1.50), whose sponsorships of organizations like the National Urban League, and donations to Susan G. Komen earns them low scores on almost all 2ndVote key issues. So while you’re at it, be sure to send a message to Walgreens, too!