Posted at 13:12h in Company Contrast, Issues, News by 2ndVote

Each week 2ndVote takes a look at popular companies that either score well or score poorly  and then try to provide alternatives that either better align with the 2ndVote values or should be avoided to the best of your ability. This series is called The Company Contrast, and the company we will be focusing on this week is Kirkland’s (3.06). 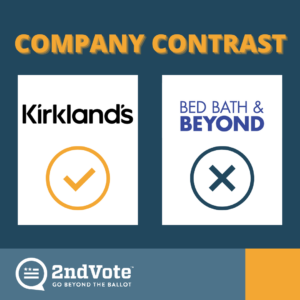 Founded in Jackson, Tennessee in 1966, Kirkland’s has grown to be among the top home decor retailers of choice for many shoppers that seek quality products at competitive prices. With roughly 430 stores across 37 states in the U.S., many of which are the result of an effort to branch out from their mall-based roots to independent storefront locations, Kirkland’s has gained a following of return customers over the years. Their seasonal approach to product selection and themes has become the retailer’s bread and butter, oftentimes completely redecorating entire store spaces for upcoming holidays. Fortunately for 2ndvote shoppers, Kirkland’s has also chosen to largely stay out of the socio-political activism space that other companies seem to chase; many of which simply froth at the mouth to jump on the latest woke trend du jour. Even better is that the minor activism that Kirkland’s has engaged in is focused on providing aid and services to homeless veterans through their partnership with The Building Lives Foundation; a worthy cause that has earned Kirkland’s points on the issue of Civil-Safe Society for supporting veteran initiatives.

On the other hand, 2ndVote shoppers should do all that they can to avoid competitors like Bed, Bath, & Beyond (1.21). Once upon a time Bed, Bath, & Beyond scored relatively decently, but they have since gone the way of the woke and their scores on all issues have dropped dramatically over the last year or so. Not only did they get caught up in the MyPillow controversy, leading them to cut ties with the pillow company and their CEO, Mike Lindell, but the home decor retailer has also offered up large donations to organizations like the NAACP, which has partnered with Planned Parenthood, whose CEO has called for widespread gun control, supports Common Core, and much more. This kind of activism has earned rock bottom scores on most issues for Bed, Bath, & Beyond. So the next chance you get, be sure to send a message to both companies through the 2ndVote website; encouraging Kirkland’s to stay strong in their neutrality, and to admonish Bed, Bath, & Beyond for contributing to the woke mob!