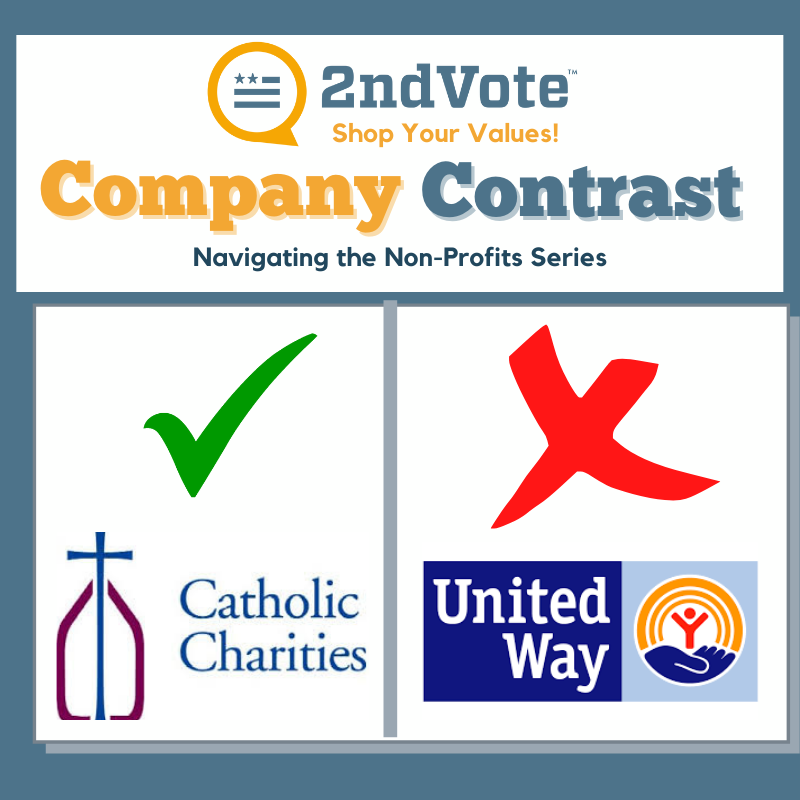 Posted at 08:32h in Basic Freedoms, Life, News by 2ndVote

Each week 2ndVote takes a look at popular companies that score poorly  and then try to provide alternatives that either better align with your 2ndVote values or should be avoided to the best of your ability. This series is called Company Contrast – Navigating the Non-Profits, and the organizations we will be focusing on this week are Catholic Charities (3.33) and United Way (2.33). 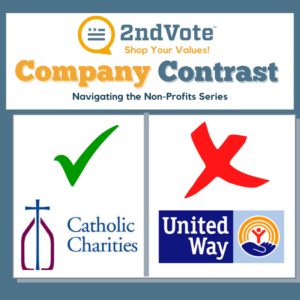 Last week a terrible tragedy happened in my county in Wisconsin. A man drove into the Waukesha Christmas parade killing six people, injuring at least 60 people including multiple children. Despite the sorrow of this past week, I was reminded of this quote from Fred Rogers:

“When I was a boy, I would see scary things in the news. My mother would say to me, ‘Look for the helpers. You will always find people who are helping.”

Seeing the community come together to support one another this past week has been encouraging and impactful. Despite the suffering, we have been able to see the generosity and goodness of many people who wanted to show their love and make a difference.

When tragedy hits a community, how can we make a big difference? Where does our financial support do the most good? Our team at 2ndVote recommends researching before donating to any cause and donating to families more directly to ensure your money goes to the people that need it the most.

After the Waukesha tragedy, the first fund I saw being advertised was the United for Waukesha Fund which is a joint effort between the Waukesha County Community Foundation and the United Way of Greater Milwaukee. Many of us were leery about this particular fund because both the Waukesha County Community Foundation and United Way of Greater Milwaukee donate to Planned Parenthood (1.25) according to their most recent tax forms.

The Waukesha Community Foundation donated $6,000 to Planned Parenthood in 2019. Furthermore, this foundation donated $15,000 to Susan G. Komen (2.67) which also supports Planned Parenthood. In addition to the past donations, their United for Waukesha fund homepage had vague language about how they would actually support these families. This concern was raised by multiple people in our community and it even forced them to make an update on their website about it.

In our research the past few months, we have noticed a lot of local community organizations and foundations have donated to Planned Parenthood and other awful causes. Even when we want to support a community after a tragedy, it is still possible that not all the money donated will be going directly to the families and community members that truly need it.

Next, after a tragedy some people will donate through multiple online platforms including GoFundMe, GiveSendGo, and PayPal. PayPal (1.50) is the least favorable option. Paypal currently has a 1.50 score overall because of their support for Planned Parenthood, Susan G. Komen, UnidosUS, and other causes. GoFundMe and GiveSendGo will be officially researched and scored by our team soon but GiveSendGo so far is the better option out of the three. GoFundMe was recently mentioned in our 2ndVote blog for preferring mob justice over actual justice by not allowing the supporters of Kyle Rittenhouse to set up a fund on their platform before the trial even took place.

Another way people have been donating is through donation of physical items. This is an excellent way to support a community after a tragedy without worrying that your donation may unknowingly contribute to a liberal cause. High school students made and donated blankets to parade victims. Some donated meals and coffee to first responders and law enforcement. Some are building wheelchair ramps for those who were injured. Some donated blood and plasma. In Waukesha county, so many people made blood donation appointments that they didn’t have any appointment openings available for the rest of the week!

Lastly, out of all the organizations showing their support after this tragedy, Catholic Charities  caught my attention. Catholic Charities of the Archdiocese of Milwaukee has multiple locations including an office in Waukesha not far from the Christmas parade route. Their motto is simply “serving neighbors in need”. Catholic Charities served their neighbors in Waukesha through offering free counseling services. Their counselors were available at various locations, churches, and prayer services all week after the parade attack. They continue to serve the community and families through their pregnancy resources, parenting support, adoption services, outreach to the homebound, addiction treatment services, and more. Also, Catholic Charities of Milwaukee accepts and distributes physical donations for families in need including new diapers, baby wipes, children’s clothing, cleaning supplies, and personal hygiene products.

In times of tragedy, we may “look for the helpers” to bring us hope and inspiration. Let us pray that we can also be the helpers and let our light shine for others as Matthew 5:16 proclaims. Let us continue to be vigilant on what our financial generosity is supporting. Our donations can further the good even more when we are able to fully research and be aware of how our money is being used in the community.

If you are tired of United Way supporting abortion, let your voice be heard by contacting their organization through our website here. If you want to be the first to know of new research, follow us on social media and become a 2ndVote subscriber today by clicking here.