Each week 2ndVote takes a look at popular companies that either score well or poorly and then tries to provide alternatives that either better align with 2ndVote values or should be avoided to the best of your ability. This series is called The Company Contrast, and the company we will be focusing on this week is Patriot Mobile (4.91). 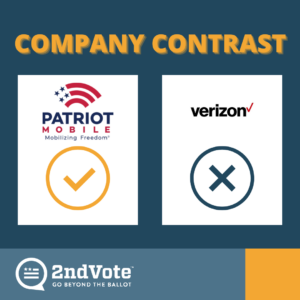 It is no surprise that nowadays most people have a phone in their hands! A majority of those phones are used for ease and surfing various social media platforms. However, many individuals have found themselves a victim of censorship! That is why we are here to recommend Patriot Mobile for your needs! Patriot Mobile is an American Christian mobile company that dedicates its mission to conservative values and ensuring your Freedom of Speech. They prioritize supporting organizations that promote Religious Freedoms, Freedom of Speech, Second Amendment rights, the needs of First Responders and Veterans, and the Sanctity of Life. If this company’s values aren’t a major selling point, we have found data that backs up how great this company truly is! Patriot Mobile scores a 4.91 here at 2ndVote due to their unwavering support of pro-life organizations and organizations that support the First Amendment. They have made various direct donations to the Alliance Defending Freedom organization, which works diligently to defund Planned Parenthood. Patriot Mobile also has made direct donations to Turning Point USA, which promotes traditional American Values. Patriot Mobile allows its users to stay connected while promoting conservative values. If you like what this phone company offers, reach out to them here.

We understand shopping around for the perfect phone plan can be challenging when there are many companies to pick from. One of the largest and most well-known phone companies out there is Verizon (1.21). We’ve given Verizon a score of 1.21 due to their spending habits. Verizon got its start in the early 2000s when it was founded in Bedminster, New Jersey. The company started as a joint venture and became the sole owner of what is now known as Verizon Communications, in 2014. Although Verizon is one of the largest phone companies and very well known, its donation history is concerning. Verizon’s charitable foundation donated $286,799 to organizations that support abortion. These donations landed the phone company with a score of 1 under our issue of Life. The company also donated to the ACLU and many organizations that partner with or support the ACLU, which opposes the right to bear arms. The company’s opposition to the Second Amendment landed them with yet another score of 1. Verizon is not a phone company that we feel aligns with traditional American Values. Therefore, we would recommend avoiding the company if possible. Stop by 2ndVote to see why Verizon scores a 1.21 with us.