Each week 2ndVote takes a look at popular companies that either score well or poorly and then tries to provide alternatives that either better align with 2ndVote values or should be avoided to the best of your ability. This series is called The Company Contrast, and the company we will be focusing on this week is ProtonMail (3.09). 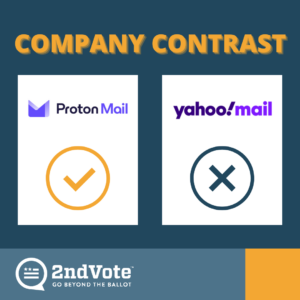 While E-mail services aren’t typically a conventional product or service that consumers pay for, and therefore aren’t necessarily something that you can “shop your values” with, we as conservative, values-minded shoppers can still choose to patronize only those services that we align with, even the free ones. In this case, ProtonMail offers a great e-mail service that is privacy-focused in its technology and forward-thinking in its mission. By and large, not much data was available for ProtonMail, which can be considered a good thing since that indicates that they prioritize their product and customers rather than engaging in any unsavory activism; resulting in a mostly neutral score. Where ProtonMail does earn points is on the issue of Basic Freedoms. ProtonMail utilizes end-to-end encryption on all e-mail communications to protect user data, and they even went so far as to provide that level of protection to protect the privacy and speech rights of people in need when it mattered most. In 2020, when the Chinese Communist Party (CCP) began its crackdown on Hong Kong, effectively ending the long-standing “one country, two systems” principle in which Hong Kong abided by a more western-style English common law political system. As a part of these crackdowns, the CCP began heavily censoring political opposition and arresting protestors and anyone else demonstrating oppositional speech. In response to these affronts, ProtonMail supported the free speech of Hong Kong residents by providing encryptions for e-mail communications, and even providing free VPN services for those living under censorship-heavy regimes like in Russia, Turkey, and Iran.

To the contrary, and certainly less noble, Yahoo! Mail (Yahoo, Inc. – 1.21 (owned by Verizon)) is a service that should be avoided. Primarily due to the actions of its parent company, Verizon Communications, Yahoo! Mail earns low scores on most issues and does not provide users with the same kind of privacy and data protection as ProtonMail.