Each week 2ndVote takes a look at popular companies that either score well or score poorly and then try to provide alternatives that either better align with the 2ndVote values or should be avoided to the best of your ability. This series is called The Company Contrast, and the company we will be focusing on this week is Food City (3.82). 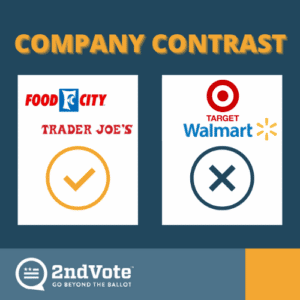 This week’s company contrast if for the last-minute Thanksgiving shoppers who lost track of time! We understand that the 2ndVote community extends throughout the U.S. and some stores may not be available to everyone! We’re here to provide you with information on some of the most common grocery stores. Our hope is to provide you with enough information to make an informed decision in a pinch!

Our focus this week is Food City (3.82). Although this chain is primarily located in the south, we recommend it if you can get to it! Food City is privately owned by the name of K-VA-T. The chain was founded in 1955 with its headquarters located in Abingdon, Virginia. Food City earns straight (5’s) in 4 out of the 6 issues we score on. Those being Education, Basic Freedoms, Civil-Safe Society, Environment. If supporting Veterans, STEM education, religious organizations, and environmental activism aligns with your values, Food City is the place to go! Show them you’re thankful for their values by reaching out to them here. You can also show them you support the work they do with your wallet by picking up your Thanksgiving feast must haves at their stores!

Don’t panic if you do not have a Food City near you! Another recommendation for our thankful friends across the country is Trader Joe’s (2.52). The franchise first opened in 1958 in Pasadena, California. The grocery store has become a hit and is well known for its privately labeled foods that are a staple in many patron’s pantries; maybe even yours this holiday season? The chain has received 3’s for most issues, including life, basic freedoms, civil-safe society, education, and environment. Proving they may be primarily focused on creating new food staples over political actions. The one detractor is that Trader Joe’s did falter to the demands of Moms Demand Action when they banned open carry in their stores, resulting in a poor score on 2nd Amendment. You can reach out to Trader Joe’s here and advocate for ways they can improve their score!

We understand that there are limited options for shoppers, especially around the holiday season. It is no surprise that some of the biggest names that provide us with the most convenience, do not align with our values. That is why we’re here to help you make an informed decision if you are faced with no other option! Though we do not recommend these stores for regular use, we know it may be helpful to some. Two of the most convenient chains are Walmart (1.38) and Target (1.24). Walmart, with the slightly higher score, is the largest retail store in the world. Walmart was founded in 1962 and has taken the world by storm due to the vast array of merchandise that fills their shelves. Target, being one of Walmart’s largest competitors, was also founded in 1962. Unfortunately for Target, we do not recommend them for your grocery needs! When comparing the two, Target receives the lower score.

The Bad: Target (1.24) receives the lower score due to their pro-abortion stance and their opposition to RFRA bills and religious liberty protections. The chain also is in opposition of the 2nd Amendment. Target has also shown support for Common Core education and the Paris Climate Agreement via monetary donations. The company took a hit when they came out with a policy that supports “abortion trafficking.”

Walmart (1.38) receives a less than desirable score due to their support of abortion and their pro-abortion stance. The corporation also supports gun control laws by donating to the National Urban League, a member of the Coalition to Stop Gun Violence. Walmart donates directly to organizations that support Common Core education standards.

The Good: Target (1.24) has shown consistent support for Veterans and Active-Duty Military personnel as well as their families.

Walmart (1.38) supports many faith-based organizations through monetary donations as well as Veterans and Active-Duty Military members and their families. Two important things to be thankful for this holiday season!