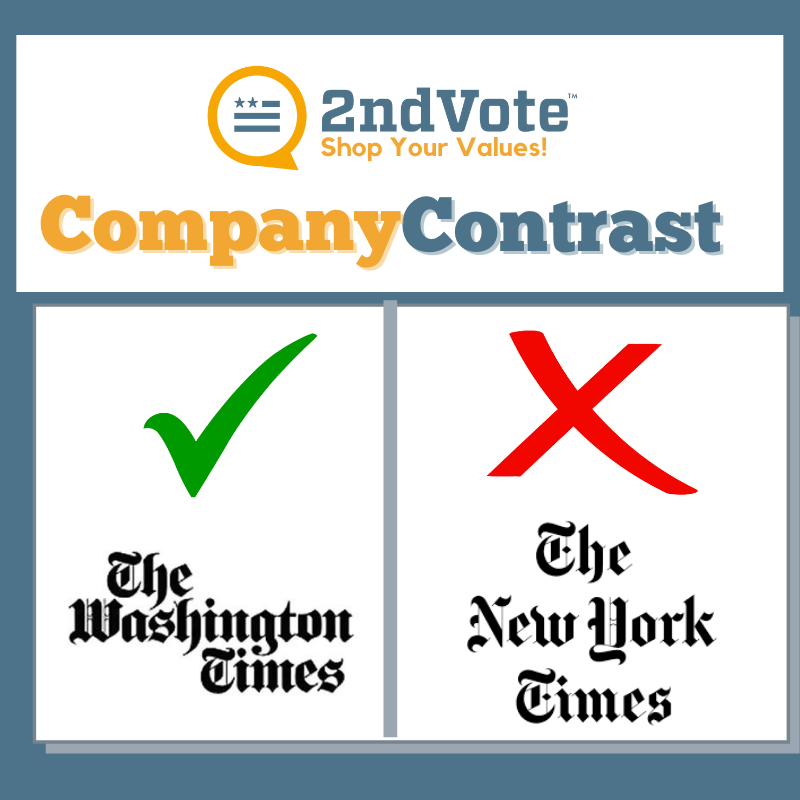 Posted at 10:21h in Basic Freedoms, News by Caroline Hastings

Each week 2ndVote takes a look at popular companies that either score well or score poorly  and then try to provide alternatives that either better align with the 2ndVote values or should be avoided to the best of your ability. This series is called The Company Contrast, and the company we will be focusing on this week is The Washington Times (3.98). 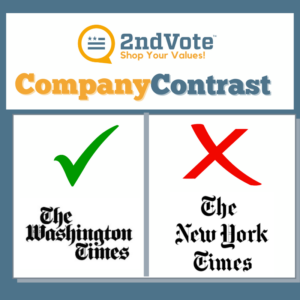 In today’s political climate where Free Speech and basic American values are under constant attack, it can be difficult to know where to get reliable news.

Luckily, Americans can turn to The Washington Times (3.98) for its reliable reporting and strong moral standards. The Washington Times is an American daily newspaper published in Washington, D.C., that covers general interest topics with a particular emphasis on national politics. Its broadsheet daily edition is distributed throughout the District of Columbia and in parts of Maryland and Virginia. Due to their support in issues such as Life, Basic Freedom, and the 2nd Amendment, the Washington Times achieved a score of 3.98 with 2nd Vote. Our research showed strong support for the sanctity of life through their donations to the American Conservative Union and to the Hosea Initiative, both of which take a pro-life stance. Their support of the American Conservative Union also furthers support for the 2nd Amendment, education, and good environmental stewardship. Additionally, the Washington Times continues to show support for American Christian values as one of the sponsors, alongside 2nd Vote, of CPAC in 2021, an annual conference that helps push forward the fight for basic American freedoms.

On the flip side, there is the New York Times (2.33). Although they score a 2.33 with 2nd Vote, and it should be noted that we were unable to score on their various liberal opinion pieces due to the paywall required to view the content, they are still a news source to avoid. While they have made significant donations to the Catholic Charities, a pro-life and Christian organization, the New York Times’ support of the Hispanic Federation can not be overlooked. By supporting the Hispanic Federation, the New York Times has indirectly funded abortion, acted against religious liberties and Christian values, supported open border advocacy and sanctuary cities, and has infringed on 2nd Amendment rights. We would encourage readers to discontinue any support of the New York Times. Furthermore, if you are appalled by these actions as much as I am, reach out to the New York Times and urge them to redirect their support to organizations that care about Americans.

Use your voice to let companies like The New York Times know the organizations you would like to see them support instead of indirectly funding abortion and demeaning religious liberties and rights with this link here. Also, please reach out to The Washington Times with this link to thank them for upholding our American values!