Each week 2ndVote takes a look at popular companies that either score well or score poorly and then try to provide alternatives that either better align with the 2ndVote values or should be avoided to the best of your ability. This series is called The Company Contrast, and the company we will be focusing on this week is Jazwares, LLC (3.05). 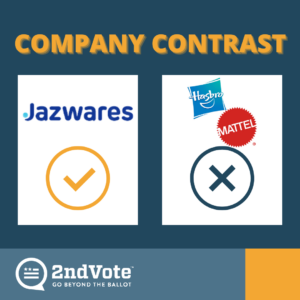 Based in Sunrise, Florida, Jazwares is an international toy manufacturer with offices and manufacturing in the United States, United Kingdom, Germany, Hong Kong, and Mexico. Jazwares is also the parent company of other manufacturers, ZAG Toys and Wicked Cool Toys, which the company acquired in 2018 and 2019 respectively. The toy company has licenses to a wide range of brands and IP including Pokémon, Fortnight, Roblox, NERF, and the ever-popular Squishmallows. Fortunately for values-conscious shoppers, Jazwares offers popular toy options without the baggage of Leftist, “woke” activism. Our research has found that Jazwares remains neutral on almost every key issue aside from Education. On the issue of Education, Jazware maintains a partnership with their local chapter of Junior Achievement, which comes with mixed values, albeit more positive than negative overall. While Junior Achievement does support Common Core education standards, their service model is primarily based on STEM, vocational, and entrepreneurship education programs.

On the other hand, large, corporate toy companies like Hasbro (1.55) and Mattel (2.36) have fallen from grace; evidenced by mixed support for organizations like United Way chapters that support Planned Parenthood, high HRC Corporate Equality Index scores, and matched employee donations to YWCA, which also supports Planned Parenthood. While toys made by these companies should be avoided, we encourage you to reach out to them and make your voice heard in hopes that they alter course and return to neutral. You can contact them through their individual company pages at 2ndVote.com!