Posted at 10:30h in Company Contrast, Issues, News by 2ndVote

Each week 2ndVote takes a look at popular companies that either score well or score poorly  and then try to provide alternatives that either better align with the 2ndVote values or should be avoided to the best of your ability. This series is called The Company Contrast, and the company we will be focusing on this week is Waffle House (4.14). 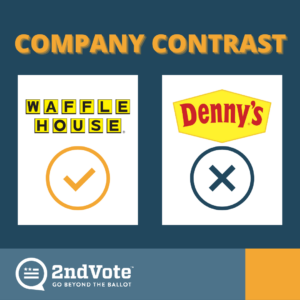 Breakfast is known as the most important meal of the day. One of the more popular dining options for the morning meal has become Waffle House. Having nearly 2,000 locations in 25 states, and with many along major interstate and US highways, it is a popular choice for travelers.

For patriotic, freedom loving Americans, fear not because Waffle House is currently 2nd Vote’s highest scoring restaurant. The company has contributed to  multiple pro-life and anti-human trafficking organizations, as well as demonstrating support for our basic freedoms and a civil-safe society by donating to several Christian ministries and law enforcement.

On the other hand, however, another popular diner chain is Denny’s (1.52). With one of the lowest scores for a restaurant company, Denny’s has demonstrated a strong support for anti-American values. They have partnered with the National Urban League, which supports sanctuary cities, Common Core education, gun control measures, and opposes religious freedom legislation.

So when you’re craving that bacon and eggs special, go for the All-Star at Waffle House and skip the Grand Slam at Denny’s. Your conscience and stomach will thank you.