Corporate Leaders, Pay Attention: Americans Want You to Get Out of Politics

14 Feb Corporate Leaders, Pay Attention: Americans Want You to Get Out of Politics

Corporate America, please pay attention. Contrary to the “woke” Twitter crowd, a new national survey shows that Americans want you to care for employees instead of catering to radical leftist policies.

According to the survey, part of which is immediately below this paragraph, 72 percent of Americans want the nation’s business community to prioritize employees now and in the future. Just 5.8 percent of Americans want the business community to put “promoting racial, gender, and LGBTQ equality through fair hiring practices” at the top of their agenda. 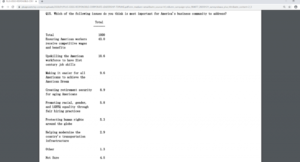 Got that? Fewer than 6 in 100 Americans want radical leftist priorities put before America’s workers and retirees. These 6 people might have the loudest voices on Twitter, Facebook, and CNN, but they don’t actually represent Americans. They don’t represent the 131 million workers across the nation. They’re just keyboard warriors.

Here are some other key takeaways on what Americans want from corporate America:

Some core beliefs Americans have are:

The truth is plain to see. Appeasing radical political leftists is bad for business and it alienates the real Americans who buy products and services every day.

Corporate America, it’s time to wake up. Get out of politics or go out of business.