“We have been a family for 41 years. I thank God for hearing my prayer, for He chose Fred to be my children’s father and the greatest husband.”
– Marie in Florida

The Heroic Men We Don’t Hear About
The Real Deal
Without One Complaint or Second Thought
A Protector, a Role Model and My Best Friend
A Man of Conviction
My Children’s Father and the Greatest Husband
Lessons From My Father
Men Who Don’t Retreat When Things Get Tough
A “Man’s Man,” Not a “Gillette Man”
It’s 3am
Feeding a Full House
A Godly Man of Integrity
Made in the Image of God
A Tremendous Sense of Honor

For the last few weeks, 2ndVote has collected stories on “the good in men” from our readers and we are thrilled to receive so many incredible responses.

We believe families are the foundation of a good and prosperous society. In a healthy family, men and women are not competitors, but they are complementary of each other’s unique traits and strengths. Furthermore, the roles of men and women combine in partnership to create the ideal environment for raising and nurturing the next generation. Unfortunately, cultural activists and the media work to create division by portraying men and women, and their masculine and feminine traits, in a state of constant conflict. The misleading “toxic masculinity” narrative aims to create distrust between the sexes and insinuates that all masculine traits are associated with boorish behavior.

Our Father’s Day project this year was developed to push back against this narrative. A few months ago, we noticed how the Égard Watch Company (3 – Neutral) responded to Gillette’s widely criticized ad campaign attacking men. Égard asked all to consider “the good in men” and understand the importance of masculinity as a value in society.

At 2ndVote, we decided we could honor men and support Égard for taking a stand as a company. Our readers have contributed a great selection of stories about the fathers, husbands, sons, and men in their lives who have shown how men are providing for their families and helping their communities. Many times, the great things these men have done go unrecognized, but from this project we see how men are sacrificing every day for the good of those around them. 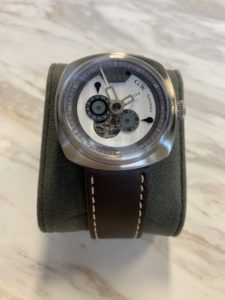 In honor of all the men who embody the values and traits we celebrate, 2ndVote is gifting a first edition V1-Gent Égard watch to Fred B. in Florida this Father’s Day. We invite you to read the contribution from his wife Marie who wrote to us about their life together and how Fred has been a great example of “the good in men.”

You can also read a great selection of the stories our readers have contributed at the top of this post. We encourage you to share this content with your friends and followers and help us change the narrative on what our culture believes about men and women.

Thank you to all who have joined this project!

Help us continue our research and content development by becoming a 2ndVote Member today!