Posted at 15:50h in From the Analysts Desk, Issues, News, Uncategorized by 2ndVote Marketing

Our goal at 2ndVote is to keep you informed on causes that corporations are supporting with your money, in order to ensure that they are held accountable for their actions. 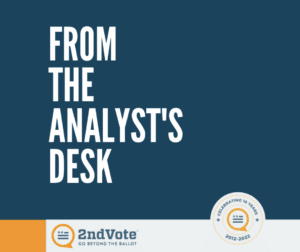 Here are some of the key findings and data points of interest discovered in our recent research:

Starbucks (1.69) – Despite historically being one of the worst, most liberal companies in the 2ndVote database, as well as scoring as low as possible on most issues, Starbucks actually has fairly good scores on both Life and Civil-Safe Society. Albeit this is not because they are perfect Samaritans on these issues. Rather, they have simply donated overwhelmingly greater sums of money to conservative organizations than liberal on those issues specifically. While they still support liberal organizations related to Basic Freedoms and Civil-Safe Society, the majority of their philanthropy has gone to organizations that support veterans in transitioning into new career fields, and Christian organizations that help to educate immigrants and refugees to become productive Americans through vocational training and citizenship preparation.

Patriot Mobile (4.91) – Patriot Mobile is the highest scoring company in the 2ndVote database. With perfect 5.00’s on all issues except for Environment (for which they earned a respectable score of 4.20), Patriot Mobile manages to have only Conservative actions and philanthropy on their record.

Amazon, Inc. (1.29) – While Amazon is one of the worst companies in the 2ndVote database, ironically, their Amazon Smile program, in which shoppers may select a charity of their choice to have a portion of their spending donated to, has provided a total of $128,235 to pro-2nd Amendment organizations like the NRA, Gun Owners of America, and the Firearms Policy Coalition in 2018 alone.