GunCam Week 1: No Signs of Violence

Are you helping us keep an eye on GunCam?

We launched this project earlier this week to find out once and for all: Do Guns Really Kill? 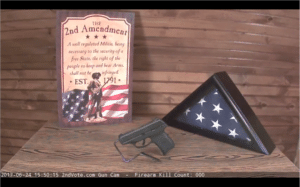 Liberals love to say, “The science is settled!” So what could be more scientific than the entire world having providing constant observation of GunCam? If you see ANYTHING we need you to tell us right away.

It’s only been four days and so far there’s nothing interesting to report. But, we need your help sharing GunC, just to be sure. The more viewers and observers that take part in this experiment, the more we can learn about the true nature of a gun. Please use these links to share 2ndVote GunCam with your social media networks:

Also, remember to sign up for your chance to WIN THE GUN!

We hope you’re having as much fun as we are with this exercise. Please take a minute to read some of the latest coverage from this week:

RedState – Does A Watched Gun Ever Kill People? We’re About To Find Out
Liberals love to tell us that guns kill people and should, therefore, be regulated into extinction. To hell with the 2nd Amendment, let’s make sure law abiding citizens are unable to defend themselves against the bad guys!

KEEP and Bear – Do Guns Kill People? The Ultimate Test
We don’t blame planes for bombing civilian targets in war, we don’t blame trains for hauling millions of innocent people to their deaths, we don’t blame cars for drunk driving deaths, and we don’t blame forks for heart disease. The problem with gun violence, isn’t the guns.