How Desirable and Feasible is “Green” Energy?

11 May How Desirable and Feasible is “Green” Energy?

Posted at 12:49h in Environment, News by 2ndVote

Based on our government’s push to transition from fossil fuels to solar and wind, we may assume a rapid transition to these “renewable” energy sources is both feasible and desirable. Proponents claim the technology has advanced rapidly, costs are low, and as for the environment, well, they don’t call it “green” for nothing.

Critics say otherwise. Although there is a place for renewables, and innovation will no doubt improve these sources of energy, there are many reasons our government should not be mandating and subsidizing wind and solar. Here are a few.

From production to disposal, solar panels leave a trail of hazardous waste. For example, solar 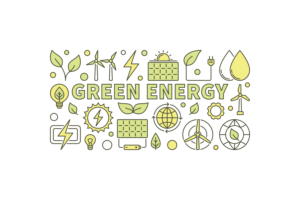 produces 300 times more toxic waste per unit of energy than nuclear, and disposed of panels create groundwater issues. Cadmium, one concerning metal in solar panels, is released from panels in landfills. According to OSHA, “Cadmium and its compounds are highly toxic and exposure to this metal is known to cause cancer and targets the body’s cardiovascular, renal, gastrointestinal, neurological, reproductive, and respiratory systems.”

Solar panels are costly, and they don’t last long. Solar farms take up a lot of land area. Solar is significantly subsidized, making it seem cheaper than it really is. Some of that subsidy comes from charging non-solar customers more for their electricity.

Mining of the necessary minerals is done in environmentally problematic ways and increases our reliance on foreign countries. China is the single largest supplier of energy materials, and we are 100% dependent on imports for 17 critical minerals.

Wind turbines last only 10-20 years, are not recyclable, and are dumped in landfills.

One million dollars spent on either wind turbines or solar panels will produce 50 million kWh of energy over 30 years, where the same investment over the same time period on a shale rig produces enough natural gas to generate 300 million kWh.

In order to completely replace fossil fuels in 20 years, energy production by alternative means would have to increase 90-fold; it took us 50 years to increase oil and gas production 10-fold. Additionally, and this is crucial, solar and wind energy technology are near their limits in terms of their physics boundaries, and further large increases are not possible.

These are some of the problems with wind and solar. The green energy alternatives are not so green and they are not up to the job of fulfilling our energy needs.