A Score From 1 to 5
2ndVote provides a simple score ranging from 1 to 5 on each company, making it easy for consumers to quickly decide if their own values match a company’s socio-political advocacy, policies and philanthropic engagements. If your values were to align entirely with the 2ndVote values, you would ideally choose a company with a score closest to 5.

(Note that scores shown here are a snapshot and may be updated later. Check the Score Center for recent changes)

If you were looking for retailers that mostly stick to their core product or service and refrain from socio-political activism, you might select those with a score of 3. Neutral companies tend to be engaged in their community, but active in less polarizing issues like general health or helping the needy. We celebrate these neutral companies for focusing on the needs of their customers. For example, both Aldi and Food City are neutral on all six of our issues.

Neutral scores may be more desirable for some consumers

Of course, the overall – or composite – score that summarizes a company is calculated from the six separate issues. We evaluate companies on their socio-political engagement on six specific issues:

Research, Inputs & Analysis
The 2ndVote Research team conducts extensive research and analyzes our findings in the process of producing a score for each issue on a company. We base our scoring system on the following types of information:

All of these actions can be defined as either monetary action (corporate donations of funds and/or fungible resources) or non-monetary activism. We score each type of action uniquely based on the type and level of influence they may have on the issue. Our systems enable researchers to search, extract, cite, and translate these actions into specific metrics that are then calculated into the score for each issue. For example, on the Life issue any direct financial support for adoption and other alternatives to abortion would drive a score up, while direct funding for Planned Parenthood would force a very low score on Life. On the Life issue alone, there are over a dozen elements and over two dozen types and levels of engagement we analyze. We also include third party support for these issues – to a lesser degree – in the issue scoring algorithms. 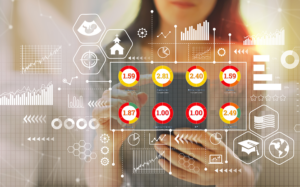 Similar factors are weighed on all six issues. Once we have completed the research and data collection, our analysts record all relevant factors into our proprietary system that places specific weights on each action and action type to produce a score for the six issues. We do not include unrelated activism in our scoring, though we do study much more than the six issues critical to 2ndVote. Those six issues are then compiled into a composite score.

Geometric Weighted Average Score
2ndVote has developed our proprietary scoring methodology to integrate the individual issue scores into a meaningful composite score. Our methodology places greater weight on some issues than others. So, instead of calculating a simple average (adding up the six issue scores and dividing by six), we employ a geometric weighted average (GWA) overall score. This GWA approach has two important features that more accurately assess a company’s support for foundational Judeo-Christian and American values, as defined by the six 2ndVote issues.

Each GWA score reflects our placing greater emphasis on some issues than others. Our rank order of importance is Life (highest weight), Basic Freedoms, 2nd Amendment, Civil/Safe Society, Education, and Environment (lowest weight). A score of 4 on Life carries more weight than a score of 4 on Basic Freedoms. Similarly, A score of 5.0 for Education cannot balance out a score of 1.0 on Life. Averaging how well we support education with the taking of a life through abortion does not calculate equally.

Our scoring algorithms produce overall company scores that better reflect their defense of (or their condemnation of) the most important American values, and gives less credit to companies operating at both edges of the spectrum. The example below shows how The Washington Times exemplifies this with six conservative scores that range from a neutral 3.0 on Civil-Safe Society to 5.0 on Life.

Our research and analysis methods, tools, and algorithms are continuously under review and making them more useful for you to make informed decisions that align your dollars with your values is how we deliver on our mission. We appreciate your feedback and your awareness.

We use this information to score each company on a scale of 1.00 to 5.00 on various issues.

The scale is calculated as follows:

Demonstrates strong or direct monetary and/or advocacy support for liberal values and organizations.

Demonstrates moderate or indirect monetary and/or advocacy support for liberal values and organizations.

Absence of any social/political advocacy or monetary support, or otherwise no information was found.

Demonstrates moderate or indirect monetary and/or advocacy support for conservative values and organizations.