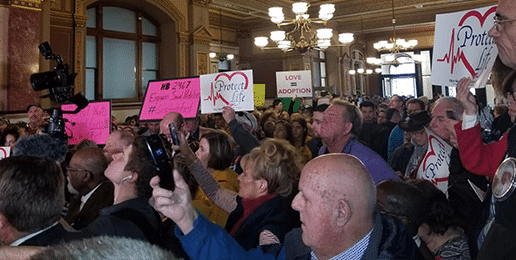 Illinois Family Action (IFA) is the 501(c)4 advocacy and lobbying arm of the Illinois Family Institute (IFI), a “non-profit ministry dedicated to upholding and re-affirming marriage, family, life and liberty in Illinois.” Like many conservative family advocacy organizations, IFI and IFA work to promote biblically-based Judeo-Christian values in society and government.

However, radical leftists in the Illinois General Assembly have filed a resolution calling for the Secretary of State to suspend IFA’s lobbying credentials because the organization has compared America’s abortion epidemic to the Holocaust. According to the resolution’s sponsors, the following now counts as “hate speech”:

We don’t have to wonder anymore. If we as a society allow this abortion holocaust to continue, we will have a front row seat to the answer. Make no mistake, the spirit that is animating support for this legislation is the same spirit that animated the creation of the killing fields, the gulags, and the concentration camps. Human life is either sacred or it isn’t. We dare not be naïve. If a newborn baby’s life isn’t sacred, neither is yours or mine.

Once again, SPLC’s propaganda is being weaponized to target conservative groups and the effort to silence conservatives is enabled by corporate sponsors.

Of course, IFA’s recent lobby day at the Illinois Capitol building is the likely reason for the ire directed by these legislators. On March 20th, over 4,000 Pro-Life Illinoisans descended upon Springfield in opposition to legislation that would eliminate restrictions on infanticide up to the moment of birth. Additional legislation currently under consideration by the General Assembly would repeal Illinois law that requires parental notification before an abortion procedure is performed on a minor.

Here are some images of the crowds that showed up to defend life: