Posted at 09:33h in 2nd Amendment, In the News, Issues, News by 2ndVote Marketing 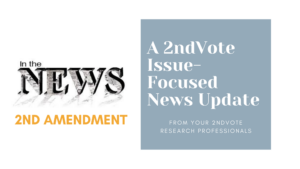 A new study, published on November 16th by the American Journal of Public Health, has revealed encouraging findings that indicate an upward trend in the number of American adults exercising their 2nd Amendment rights to carry a firearm in public for their own protection. Out of a sample derived from a 2019 cross-sectional NFS survey, a representative group of handgun owners were surveyed on their carrying habits. Results of the study show that, of the respondents that have at least one handgun in their home, 30.3% reported having carried their handgun within the past 30 days. Of those that reported carrying within the past 30 days, 38.1% reported having carried their handgun every single day. Additionally, the average number of carrying days (within the past 30 days) was reported to be 18 out of 30 days. When approximated to the population of the United States, these results estimate that 16 million American adults carried their handgun within the past month, and 6 million are estimated to have carried every day in 2019; up from 9 million and 3 million in 2015, respectively. Interestingly, the primary motivation of carrying a handgun for self-protection also showed an upward trend. In 1994, approximately 46% of those that carried a handgun reported doing so for self-protection. That percentage rose to 64% in 2015, and further to 73% by 2019. These statistics also roughly correlate with a rise in states legislating permitless carry; with that number rising from 1 in 1990, to 21 by the start of 2022.

While it’s certainly a delight to see that Americans are choosing more and more to exercise their rights, it is crucial to remember that it’s not enough to simply own and carry a firearm. Consistent and frequent training and practice is required to be a safe, responsible gun owner; and one that is truly capable of protecting themselves and their loved ones.