Made in America: My Pillow, Inc

05 Dec Made in America: My Pillow, Inc

Posted at 15:07h in Made in America Series, News, Uncategorized by 2ndVote Marketing

Here at 2ndVote we always advocate for the three pillars of shopping your values; Shop Local whenever possible, Shop the Highest 2ndVote Score whenever possible, and Shop American whenever possible. American production has been outsourced overseas for the sake of labor costs, sometimes even using slave labor, for far too long. It is high time that we as Americans demand that the goods and services we purchase are made by Americans, for Americans, in AMERICA!

That is why 2ndVote endorses a product Made-in-America every week. This weekly message features various products that have been verified to be truly American-produced so that 2ndVote shoppers can better support American economic independence. It should be noted that while any products or companies featured in this series have been vetted for being American made, there is not a guarantee that all such companies have been scored by 2ndVote at the time of publication.

This week’s featured Made-in-America product is the My Pillow, Classic Premium Pillows 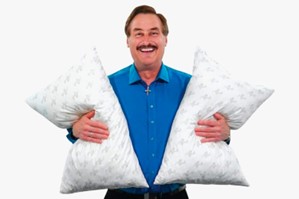 My Pillow, Inc. is an American pillow-manufacturing company. The company was founded in 2009 by Mike Lindell who invented and patented My Pillow, an open-cell, poly-foam pillow design. From 2004 to 2009, My Pillows were sold through Lindell’s Night Moves Minnesota, LLC, and have been sold through My Pillow, Inc. since 2009. My Pillow has sold over 41 million pillows.  The company started with five employees in 2004 and had 1,500 employees by 2017.

Mike beat a 30-year drug addiction through the power of prayer, and firmly believes that with God, all things are possible.

The Lindell Recovery Network will connect people struggling with addictions to stories of hope.

He donated one million dollars to help fund the new “Unplanned” movie, which tells the story of former Planned Parenthood director, Abby Johnson. Mike also has a cameo in the movie.

MyStore is a new platform of Lindell’s; a soon-to-be launched marketplace for vetted entrepreneurs and inventions.

My Pillow is made in Chaska, Minnesota

Check them out at:  https://www.mypillow.com/

The best way to make positive change in the world of woke businesses is to vote with your wallet, so remember shop local, shop the highest score possible, and shop American! 2ndVote is not paid for this feature.