Made in America: Outdoor Nativity Sets

Posted at 15:03h in Made in America Series, News, Uncategorized by Ben Vega

Here at 2ndVote we always advocate for the three pillars of shopping your values; Shop Local whenever possible, Shop the Highest 2ndVote Score whenever possible, and Shop American whenever possible. American production has been outsourced overseas for the sake of labor costs, sometimes even using slave labor, for far too long. It is high time that we as Americans demand that the goods and services we purchase are made by Americans, for Americans, in AMERICA!

That is why 2ndVote endorses a product Made-in-America every week. This weekly message features various products that have been verified to be truly American produced so that 2ndVote shoppers can better support American economic independence. It should be noted that while any products or companies featured in this series have been vetted for being American made, there is not a guarantee that all such companies have been scored by 2ndVote at the time of publication. 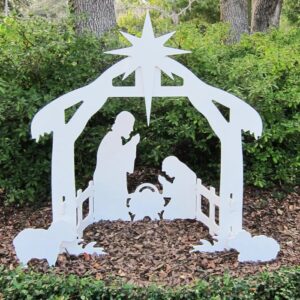 OutdoorNativitySets.com was launched in late 2010. With the challenges of the economy, their parent company Teak Isle Manufacturing, a 30-year supplier to the marine industry, was faced with cutting its workforce during the holidays. The fact was that fewer people were buying boats and the holiday months were going to be extremely slow.

Years ago, one of the owners of Teak Isle saw a silhouette nativity set at a Christmas tree stand that was made of plywood and painted white. He was taken by the simplicity of the part and loved the message that it conveyed. He bought the set and proudly displayed it in his yard. Later that year, he decided to work with his designers to build a set that was like the one he had purchased but designed and cut from marine grade plastic to withstand the weather conditions for years to come. Teak Isle built some of these nativities for friends and family members and eventually supplied some to local Christmas tree stands. At the time, this was done more for the satisfaction of seeing the nativities around the neighborhood and the joy of being able to offer such a meaningful keepsake.

In October 2010, the decision was made to redesign our nativity sets so that they could be shipped UPS and broken down for easy storage for the rest of the year. We stayed true to the simple, white and non-commercial style and continued to make them from marine grade plastic. Our feeling was that if we offered a high-quality AMERICAN MADE product at an affordable price that people would be happy to support us. We were excited by the fact that we were able to keep all of our employees working through the holidays and found peace in the thought of our nativities sitting in neighborhoods all around the country reminding people of the true reason for the season.

Outdoor Nativity Sets are made in Ocoee, Florida

Check them out at https://www.outdoornativitysets.com/

The best way to make positive change in the world of woke businesses is to vote with your wallet, so remember shop local, shop the highest score possible, and shop American! 2ndVote is not paid for this feature.