Made in America Series: Duluth Pack

This week’s featured Made-in-America product is the Duluth Pack: 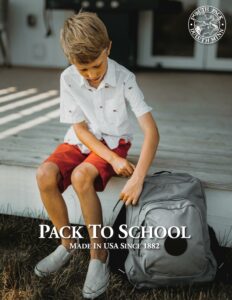 Duluth was born and raised in the northern forests of Minnesota. Duluth Pack is proudly the oldest canvas and leather bag and pack manufacturer in the USA. Continuously since 1882, Duluth Pack has blazed the trail for manufacturing quality outdoor gear in America. The company’s mission is simple, straightforward, and has never wavered. We handcraft the highest-quality premium American-made canvas and leather outdoor gear, packs, bags, and hunting equipment that is guaranteed for life on all craftsmanship and hardware. Duluth stands behind its products that stand the test of time. Buy it once. Have it for life.

Duluth Pack is made in Duluth, Minnesota

Go to the Duluth Pack here!