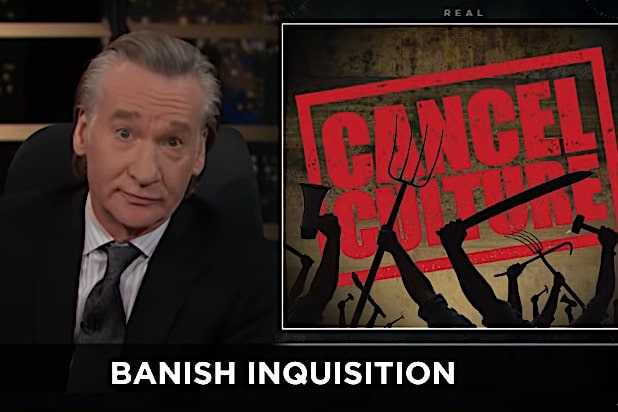 It seems even those who lean left are getting tired of Cancel Culture’s charades. Last Friday, Bill Maher stood up against Cancel Culture in his typical foul-mouthed, no-holds-barred manner, tweeting, “Memo to social Justice warriors: when what you’re doing sounds like an Onion headline, stop. #CancelCultureIsOverParty.” Underneath he added a clip from his show, “Real Time With Bill Maher” detailing his issues with the Cancel Culture narrative, including the cancellation of Gina Carano, Justin Timberlake, and perhaps most absurdly, a Latino man who the wokeist crowd condemned as a white supremacist.

Maher’s condemnation of Cancel Culture came at the right time. “Mr. Potato Head” and “Mrs. Potato Head” are now genderless, to fit in with the new “acceptable” – if biologically incorrect – norms. Dr. Seuss was canceled because a handful of people believe he was racist. And Ryan Anderson’s When Harry Met Sally, a thoughtfully conservative book on the gender identity debate, was canceled by Amazon despite its popularity.

Maher’s opinion set off an angry torrent of comments under his tweet, with some people defending their “right” to cancel others, and others stating ad hominems to justify their actions. We here at 2ndVote do not endorse Maher, particularly because of his anti-religion stance, support for Medicare-for-All, and similar concerns.  But we can definitely acknowledge he hit a nerve among the leftist crowd. It’s refreshing to see a prominent liberal call out Cancel Culture — it’s a sign that they’re not popular among anyone but their far-left cronies.

Corporate America needs to take a note from Maher. No matter what a business does to appease the Cancel Culture crowd, it doesn’t reduce their chances of getting canceled — it just puts them under a microscope for critical leftists. As we’ve discussed here on 2ndVote in the past, even big companies like Google (1.00) are struggling to stay on the good side of the woke Cancel Culture crowd, despite their support for popular leftist causes such as Black Lives Matter (2.14).

It’s time to let go of woke guideposts and ignore the leftist ideals of what a good company looks like. If Corporate America is to survive the Cancel Culture world, companies need to go back to basics and focus on customers first and always.