Media Watchdog: Everyone Is Mad at the NFL 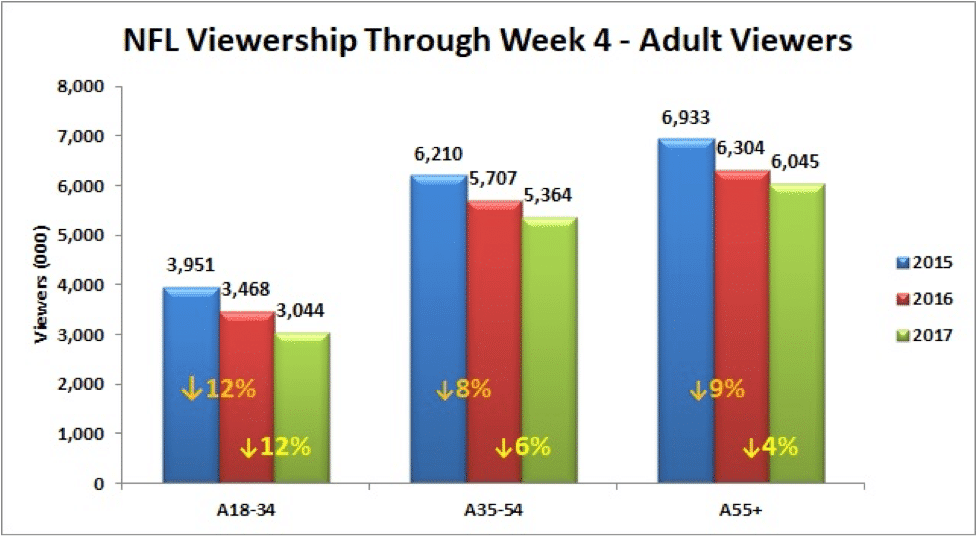 06 Oct Media Watchdog: Everyone Is Mad at the NFL

The average telecast viewership for National Football League games is down 7% over the first four weeks of the season compared to 2016.

Awful Announcing, a sports media critic blog, is reporting today that nearly all demographics, age, sex, and ethnicity, are watching less of the NFL this season. To make matters worse for the league, the downward trend started in 2016 and has continued.

Here is a chart from the report: 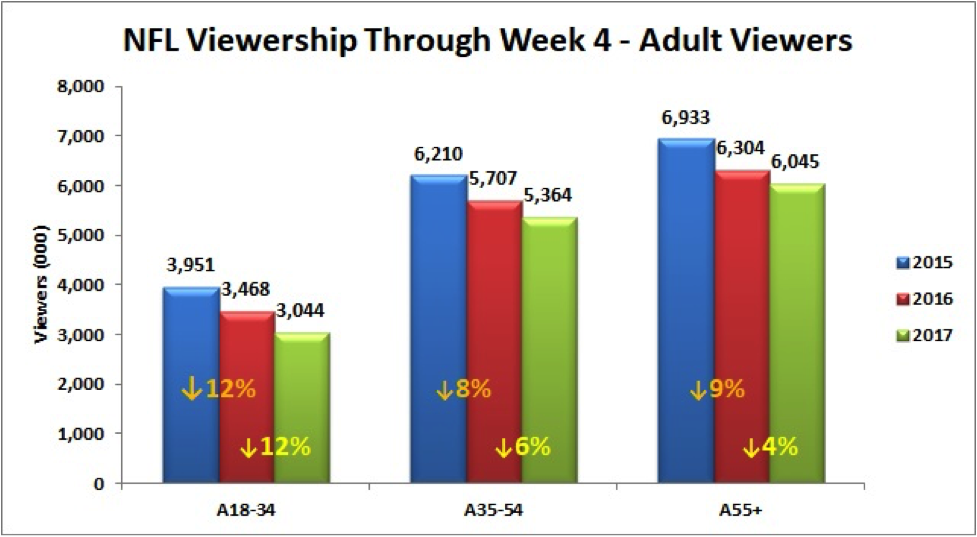 As the trend continues, blaming the presidential election in 2016 and hurricanes in 2017 is failing to account for the low ratings. After all, “for those still exploring the Election Day theory, the first four weeks of the 2013 season were 5% better than 2012.”

Now, the NFL and the players themselves could stymie the loss of viewership by abandoning the efforts to politicize the games themselves. When the national anthem protests began last year, 44% of fans polled said they would stop watching the NFL altogether if the protest continued. It appears those fans have stuck by their claim.

In addition to the ending the anthem protests, the league and the players should start defunding the leftist organizations they support. For example, the NFL (click here to view the NFL’s scorepage) is a corporate partner for GLAAD, and has contributed to Susan G. Komen, an organization that funds Planned Parenthood. The NFL has also taken controversial positions against protections for religious liberty in states like Indiana, Georgia, North Carolina, and Texas.

All in all, the ratings are showing that the fans are fed up, and politics appears to be the main reason. 2ndVote’s discovery of the NFL Players Association’s donation to Soros-funded “resistance” groups is the most illustrative evidence of a sports league that has lost its way, especially amongst conservatives.

However, advertisers and companies that contract with the NFL are starting to notice the fans’ dissatisfaction. DirecTV is refunding the fees for its premium out-of-market package to viewers who complain about the anthem protests and Anheuser-Busch established a customer hotline to register opinions on the company’s sponsorship of the league.

See how you can make an impact by contacting Anheuser-Busch here or getting your refund from DirecTV here.