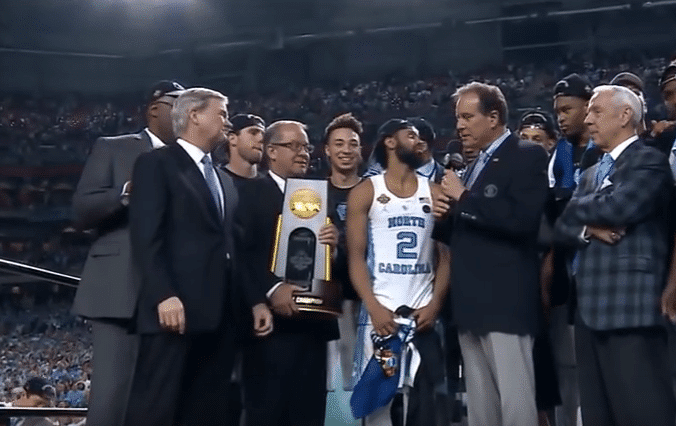 Perhaps the University of North Carolina’s basketball team winning the NCAA National Championship Monday night was poetic justice. As NCAA President Mark Emmert took the microphone during the post-game trophy presentation, a chorus of “boos” rained down from the North Carolina faithful.

Leaders of governing bodies in sports are easy targets for the ire of fanbases, just ask the NFL’s Roger Goodell. Passions do run deep, but this year, this week even, it’s fitting that those in Carolina blue would get to voice their displeasure because Emmert and NCAA actually did target an entire state over politics.

In September, the NCAA announced that the State of North Carolina would be stripped of its host sites for post-season events due to HB2, the legislation enacted to overturned the City of Charlotte’s new ordinance that allowed men into women’s restrooms and locker rooms. HB2 introduced common-sense protections for individuals and small business owners, but was attacked by liberal LGBT advocacy groups and their corporate allies like Bank of America and PayPal.

After the National Basketball Association caved to pressure and moved its All-Star Game from Charlotte, the NCAA and Atlantic Coast Conference followed suit. North Carolina Lieutenant Governor Dan Forest summed up how pressure from the left led to these decisions:

“The line has now been drawn in the sand, first by Hollywood, now by the N.B.A. and N.C.A.A.: Either accept their progressive sexual agenda or pay the price.”

But now the story has started to change, and the threats made by liberal groups like the Human Rights Campaign (HRC) and EqualityNC haven’t had the predicted impact. In fact, businesses continue to flock to North Carolina and recent reports have showed an increase in important tourism metrics for 2016.

It appears that in the wake last week’s “compromise” to roll back parts of HB2, it’s no longer politically expedient for the NCAA to continue punishing North Carolina. As of this morning, the organization has indicated that it will consider North Carolina for future championship host sites, despite demands the liberals at HRC to continue doing just that.

What the measure has succeeded in doing is revealing the definition of compromise for LGBT agitators – total surrender of those who oppose their radical agenda.

And this is what Emmert, the NCAA, and companies like Bank of America should have considered in the first place. By helping push the left’s agenda without regard to safety and privacy, they’re responsible for creating the ensuing controversy when political decisions on these issues are best left to the voters and their elected representatives. The “compromise” on the repeal of HB2 has essentially put North Carolina back to where things were before the City of Charlotte passed it’s original “bathroom” ordinance.

Of course, it’s possible Emmert and the NCAA are looking at what has happened to Target for taking the very same position on the this issue.