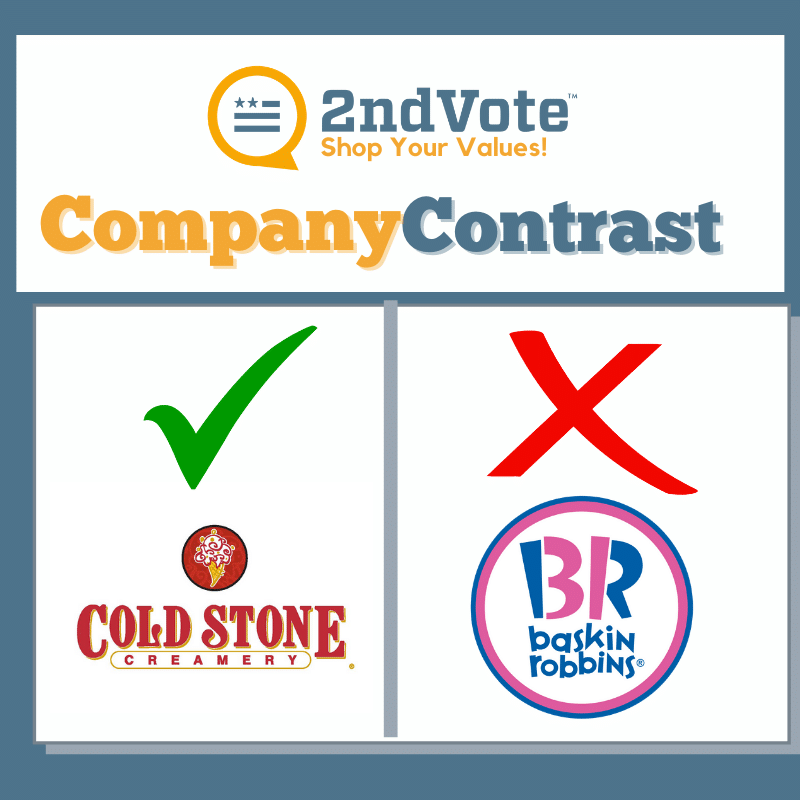 Posted at 07:37h in Basic Freedoms, Environment, News by 2ndVote

Each week 2ndVote takes a look at popular companies that score poorly and then provides alternatives that better align with the 2ndVote values. This series is called The Company Contrast, and the company we will be focusing on this week is Baskin-Robbins (2.33).

Founded by Burt Baskin and Irv Robbins in 1945, Baskin Robbins got its start in Glendale, California, but has since grown to 2,500 locations stateside and over 5,000 international locations across 50 countries under Dunkin’ Brands (2.33) ownership (now owned by Inspire Brands). Unfortunately, their parent company has demonstrated their alignment with leftist ideals, having been a signatory to the Ceres Climate Declaration, supporting a business coalition that’s in favor of cap-and-trade. Additionally, Baskin Robbins’ ownership has earned a score of 100 on the Corporate Equality Index from the HRC; the HRC being one of the most prominent sponsors of the Equality Act and in opposition to religious liberty protections. Such activism only ensures that consumers cannot simply purchase a product without unwanted radical leftist baggage, earning Baskin-Robbins deductions on the 2ndVote issues of Basic Freedoms and the Environment.

Fortunately for ice cream aficionados, Cold Stone Creamery (3.00) offers an ice cream experience that won’t leave a bad taste in your mouth. As a private company, Cold Stone Creamery was found to have remained neutral in alarmist activism making them an acceptable alternative to the aforementioned competition.