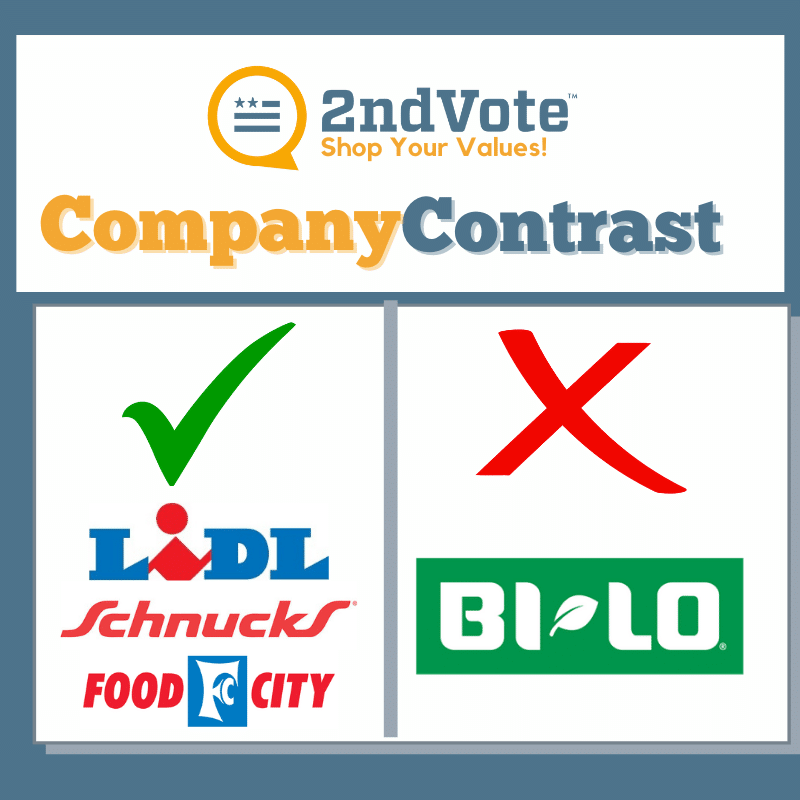 Each week 2ndVote takes a look at popular companies that score poorly and then provides alternatives that better align with the 2ndVote values. This series is called The Company Contrast, and the company we will be focusing on this week is BI-LO (2.17).

Founded in 1961, then rebranded to its current namesake in 1963, BI-LO got its start in Greenville, SC, after Frank Outlaw purchased four grocery stores from the Wren & Syracuse chain. Since then, ownership of BI-LO has changed hands on a number of occasions and the chain has expanded across many southeastern states. What may be more troubling than its bankruptcy in 2009, is the kind of activist philanthropy BI-LO pursues. Despite actually scoring relatively well on the issues of Life and the 1st Amendment (Basic Freedoms) for donations to Catholic Charities and The Salvation Army, BI-LO also contributed to The National Urban League. Such donations meant that BI-LO lost points on all the issues that The National Urban League advocates on… which is all of them. Since The National Urban League opposes RFRA policies, calls for the repeal of “Stand Your Ground” laws, and supports sanctuary cities, Common Core education standards, and environmental alarmism, BI-LO suffers poor scores on all other issues.

On the other hand, shoppers can find better alternatives in Food City (3.00), Schnucks (3.00), and Lidl (3.00). All three grocers have shown to remain neutral when it comes to activist philanthropy, offering a comparable service without the baggage of knowing your hard-earned dollars are being funneled to support causes and organizations that either don’t support your traditional values or actively work against them.