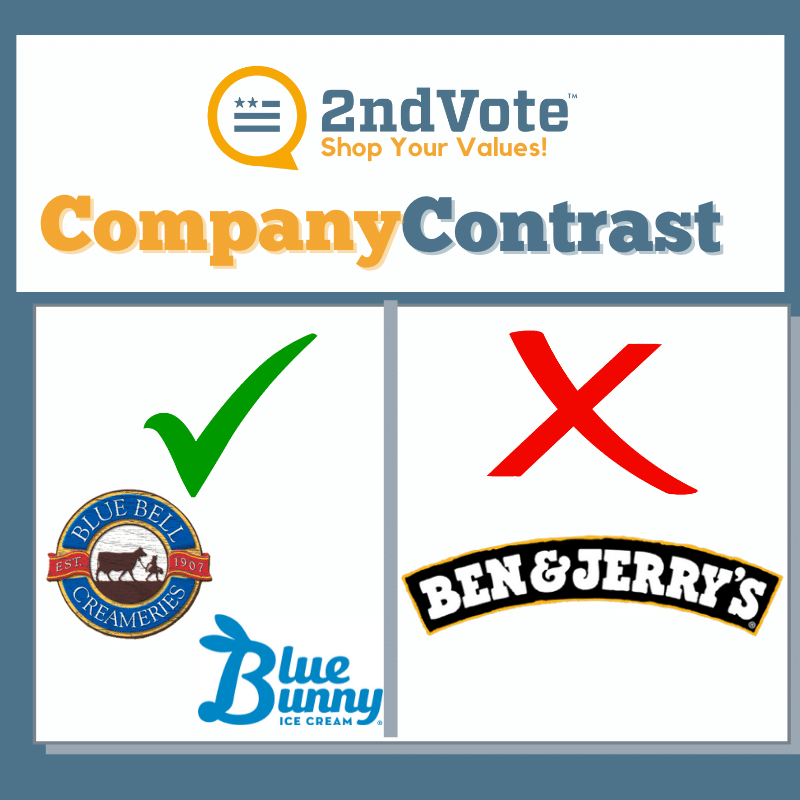 Each week 2ndVote takes a look at popular companies that either score well or score poorly and then provides alternatives that either better align with the 2ndVote values or should be avoided to the best of your ability. This series is called The Company Contrast, and the companies we will be focusing on this week are Blue Bunny Ice Cream (3.00) and Blue Bell Ice Cream (3.00).

With the leftist-organized boycott of Israel infecting the already liberal likes of Ben & Jerry’s, it’s becoming more and more difficult for shoppers to find a sweet treat that doesn’t go against their American values. Fortunately, there are a handful of ice cream makers out there who seem to prioritize just that – making ice cream. Both Blue Bunny and Blue Bell come in at a sweetly neutral 3.00 on the 2ndVote rating scale. At the time of their last update, no significant information was found indicating any political leaning for either brand. This apparent lack of social or political activism indicates that Blue Bell and Blue Bunny would rather focus their energy on producing the best product they can and provide the only thing their customers ever asked for. While we love to see companies go the extra mile in supporting conservative causes, here at 2ndVote, we certainly won’t scoff at companies who manage to remain neutral in today’s heightened political atmosphere.

Unfortunately for many ice cream lovers, one of the most popular brands in the country, Ben & Jerry’s (1.00), recently dug even deeper into its liberal activism with its unilateral boycott of Israel. The company claims that the boycott is due to continued “Israeli occupation of Palestinian territory,” but it’s clear the move was only meant to appease pressure from leftists in their customer base. Reach out to Ben & Jerry’s and let them know how you feel about this decision.