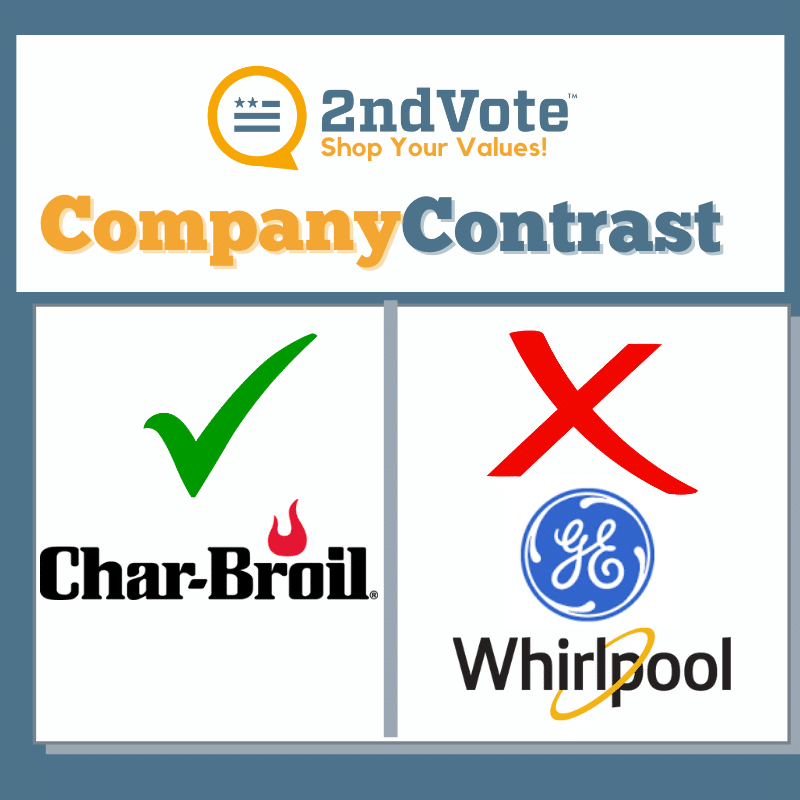 Each week 2ndVote takes a look at popular companies that either score well or score poorly and then provides alternatives that either better align with the 2ndVote values or should be avoided to the best of your ability. This series is called The Company Contrast, and the company we will be focusing on this week is Char-Broil (W.C. Bradley Co. – 3.96).

Founded in 1948 as a new outdoor leisure brand from its parent company, W.C. Bradley Co., Char-Broil is one of the most well-known outdoor cooking brands on the market. In fact, Char-Broil is accredited with producing what is thought to be the first-ever cast iron, charcoal grill on the market at the time. Since then, the brand has grown to be sold across the globe in North America, Australia, Europe, Latin America, and the Middle East. Char-Broil is also the best-selling brand of grills in the U.S. Fortunately, Char-Broil and its parent company also have a positive record of philanthropy. With various donations to faith-based organizations, ministries, and charities like The Salvation Army that support pro-life stances and stand for religious liberty, Char-Broil earns high scores on the issues of Life and Basic Freedoms. As some of the aforementioned ministries are youth educational organizations, they also receive top marks on the issue of Education. Unfortunately, W.C. Bradley Co. has also contributed to their local Urban League chapter, of which is an organization that supports sanctuary cities and opposes “Stand Your Ground” laws. This blemish on their record means a reduction on the issues of Border Security/Immigration and the 2nd Amendment.

On the contrary, competitors that should be avoided include GE (General Electric – 1.00) and KitchenAid (Whirlpool Corp. – 2.65). GE is a particularly problematic company given their liberal advocacy on every single issue; including support for several pro-abortion organizations and others that support Planned Parenthood.