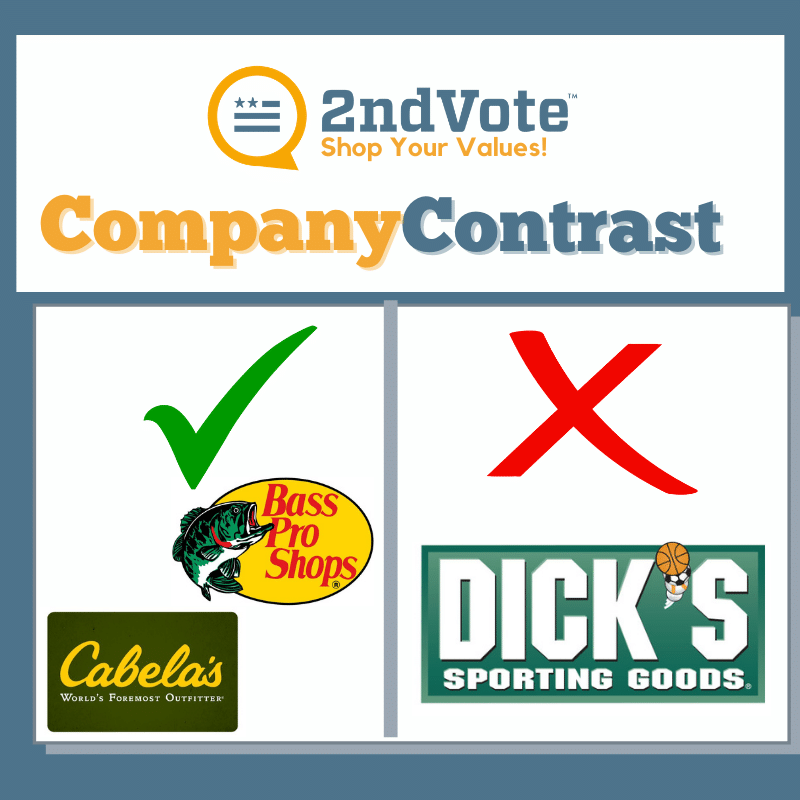 Each week 2ndVote takes a look at popular companies that score poorly and then provides alternatives that better align with the 2ndVote values. This series is called The Company Contrast, and the company we will be focusing on this week is Dick’s Sporting Goods (2.56).

Founded by Richard “Dick” Stack in Binghamton, New York, in 1948, Dick’s Sporting Goods got its start as a bait and tackle shop. It wasn’t until the store was purchased by Stack’s children, with his son Edward taking the reins as Chairman and CEO, that Dick’s Sporting Goods developed into the retailer we know today.  Although Dick’s Sporting Goods used to be a beloved outlet for all your sporting needs, recent years have seen the company take a hard left turn. Despite giving moderate donations to The Salvation Army, their activism primarily leans toward liberal philanthropy. The most troubling of which is their stance on the 2nd Amendment; which includes the destruction of more than $5 million worth of firearms, stripping firearms from their shelves altogether in roughly half of their stores, and their CEO signing a business coalition letter to the U.S. Senate in support of “Red Flag” confiscation laws. For these transgressions, Dick’s Sporting Goods receives poor scores across most of our 2ndVote key issues.

Alternatively, 2ndVote shoppers can visit Dick’s Sporting Goods’ primary competitors, Bass Pro Shops (3.33) and Cabela’s (3.33). With nearly identical product offerings, Bass Pro Shops and Cabela’s (which is owned by Bass Pro) make for a solid choice for your 2ndVote dollars. Bass Pro’s partnership with the NRA to create the NRA’s National Sporting Arms Museum goes hand in hand with their offerings of hunter safety, firearm safety, and concealed carry classes. This kind of support for our 2nd Amendment rights ensured that Bass Pro Shops and Cabela’s received positive points on the 2ndVote issue.