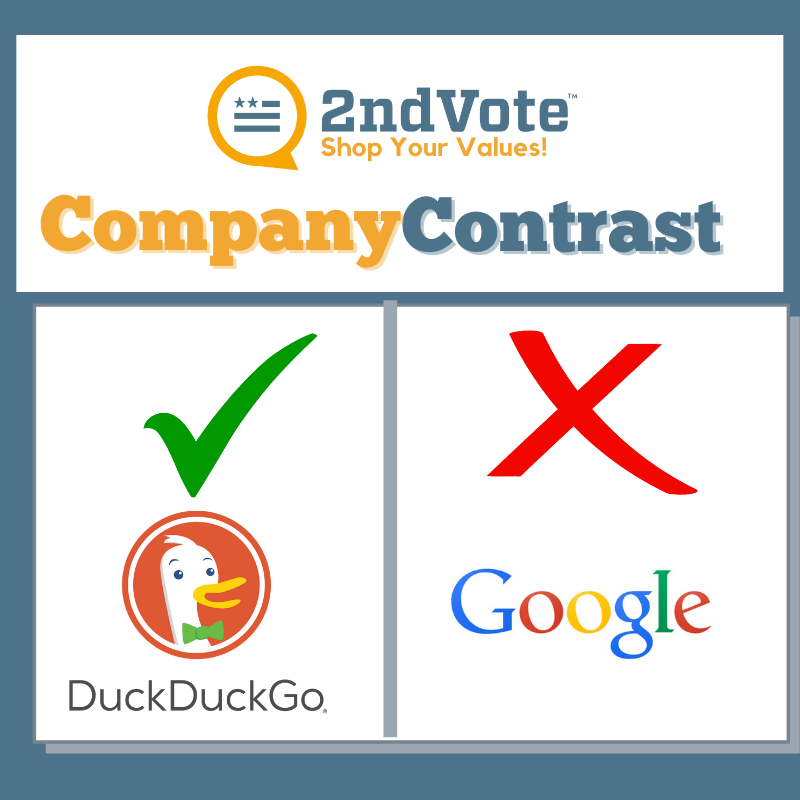 Each week 2ndVote takes a look at popular companies that either score well or score poorly and then provides alternatives that either better align with the 2ndVote values or should be avoided to the best of your ability. This series is called The Company Contrast, and the company we will be focusing on this week is DuckDuckGo (3.33).

Founded by Gabriel Weinberg, DuckDuckGo was launched in 2008 as a privacy-focused internet search engine that offered a competitor to the ubiquitous Google. With a strong focus on user privacy, DuckDuckGo promises to protect user-information with various features that go against the norms of Big Tech. Users can expect that their personal information, search histories, and IP addresses will not be tracked, recorded, traded, or sold. With every search being encrypted, DuckDuckGo is able to provide users with a search engine that prevents and blocks ads based on user behavior, as well as blocks tracking technologies embedded within websites. Furthermore, DuckDuckGo does not funnel users into a “filter bubble” that only presents search results tailored to their search history. So users can trust that there will be no bias in the results they see. Perhaps one of the best aspects of DuckDuckGo is their philanthropy. Not only does DuckDuckGo’s mission promote values of online freedom and privacy, but they really put their money where their mouth is through hundreds of thousands of dollars in donations to other organizations and nonprofits that advocate for freedom of speech, digital privacy, and net neutrality, worldwide. Because of this, DuckDuckGo has earned high marks on the 2ndVote issue of Basic Freedoms, as well as a favorable composite score.

On the other hand, the Big Tech giant, Google (Alphabet, Inc. – 1.00), for whom their name has become synonymous with the act of searching the internet, is one of the biggest offenders when it comes to encroaching on the freedom and privacy of internet users. Not only does Google almost exclusively do all of the things that DuckDuckGo promises not to do, but their corporate activism goes far beyond internet-related issues. With millions of dollars per year going to a variety of leftist organizations, on a variety of issues, Google is among the wokest of the woke and should be avoided whenever possible. Send Google a message or write to them at 1600 Amphitheatre Parkway, Mountain View, CA 94043, and let them know how you feel about their woke advocacy and lack of respect for our basic freedoms! Then THANK DuckDuckGo for valuing our freedom of speech and respecting our basic freedoms.