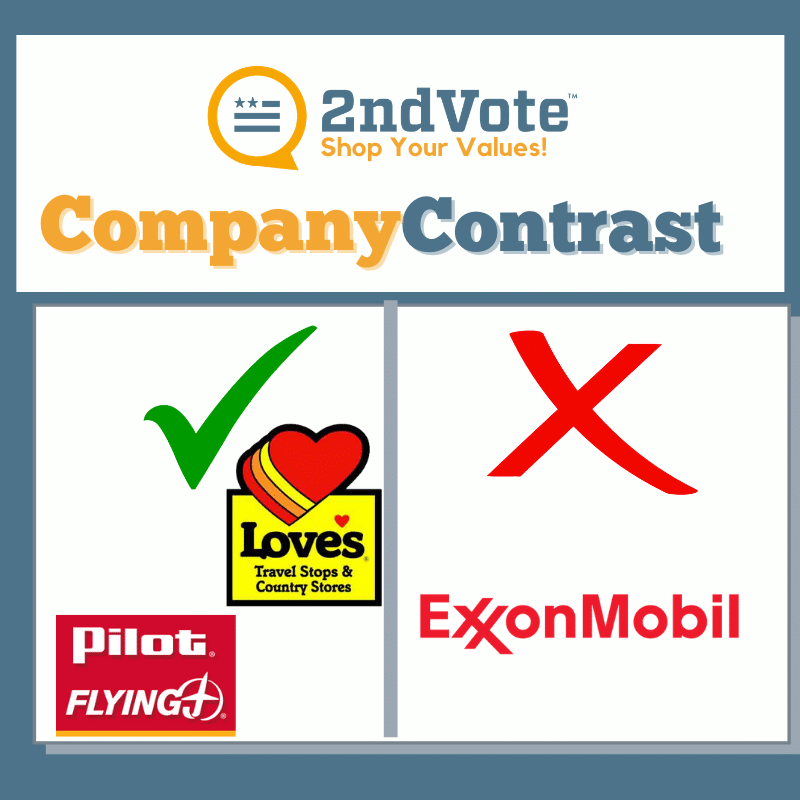 Each week 2ndVote takes a look at popular companies that score poorly and then provides alternatives that better align with the 2ndVote values. This series is called The Company Contrast, and the company we will be focusing on this week is ExxonMobil (1.50).

Formed from the merger of Exxon and Mobil in 1999, both direct descendants of Standard Oil of Rockefeller fame, ExxonMobil is one of the largest major oil companies in the world. As one of the top Fortune 500 companies in the U.S., it is undeniable that ExxonMobile carries economic and even socio-political sway. Unfortunately, the oil and gas giant has used its influence to advocate for leftist agendas for the past several years. Not only has ExxonMobil matched employee contributions to Planned Parenthood, but they also maintain partnerships with organizations various organizations whose activism includes support for abortion, sanctuary cities, Common Core education, and the Equality Act, which contains provisions that infringe on religious liberty rights. For these actions, ExxonMobil receives significant point reductions across nearly all of the 2ndVote key issues; so best to avoid their fuel pumps.

Fortunately for motorists everywhere, Pilot Flying J (3.00) and Love’s (3.00) both offer neutral options when you’re in need of gas but don’t want your dollars going where they shouldn’t. With locations across the country, both Pilot Flying J and Love’s offer high-quality gas stations, often paired with food chains, with a variety of accommodations and amenities for those long summer road trips!