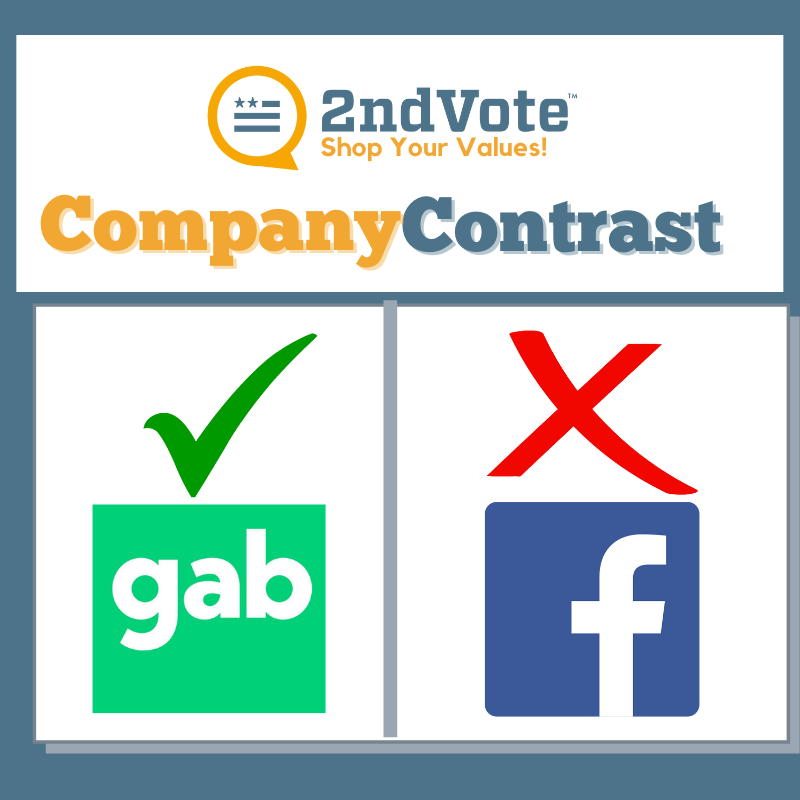 Each week 2ndVote takes a look at popular companies that either score well or score poorly and provides alternatives that either better align with the 2ndVote values or should be avoided to the best of your ability. This series is called The Company Contrast, and the company we will be focusing on this week is Gab (3.15).

Launched in 2016 in response to widespread media and news bias surrounding the presidential election, Gab was founded by Andrew Torba in hopes of offering an alternative to tech and social media giants like Facebook and Twitter. With rampant censorship across the largest and most popular social media platforms, Torba wanted to offer users a bias-free platform that people could use with confidence knowing that their posts and content weren’t going to be arbitrarily deleted for going against unexplained “community guidelines”. Gab’s official stance states that they “…build Freedom of Speech software” and “champion free speech, individual liberty, and the free flow of information online.” Gab has even launched their own “free speech” open source web browser that aims to give users all of the ease and wealth of information of Google’s search engine but without the breaches in privacy like data tracking, data mining, and pesky ads. Gab’s valuation of free speech and privacy protection that is inherent in their products and business model means that they earn points on the 2ndVote issue of Basic Freedoms. So be sure to check out Gab, and many of the other Big Tech alternatives that are popping up on the market today.

On the contrary, the obvious competitor to avoid is Facebook (1.00). Facebook’s censorship of conservative voices, and even moderate voices who dare to ask the right questions, on their namesake platform as well as on Instagram, is so well known and documented that it’s a wonder they can continue to deny it. Furthermore, the corporation’s extensive activism for leftist organizations earns them the lowest possible scores across the board on all 2ndVote issues.