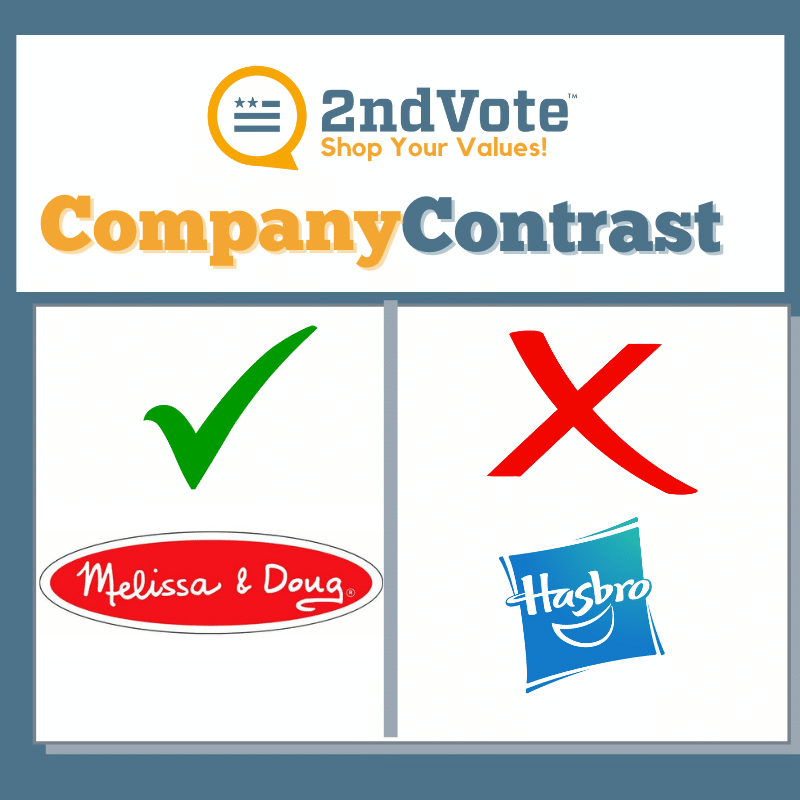 Each week 2ndVote takes a look at popular companies that either score well or score poorly and then provide alternatives that either better align with the 2ndVote values or should be avoided to the best of your ability. This series is called The Company Contrast, and the company we will be focusing on this week is Melissa & Doug toys (3.15).

Founded in 1988 by husband and wife duo, Melissa & Doug, the company of their namesake got its start in a garage and has since grown into a multi-million dollar toy company. With a focus on child-led, interactive play, Melissa & Doug toys specialize in low-tech toys, including wooden toys of all types, dolls, games, puzzles, and more; their company philosophy being that while technology may have its place, classic children’s toys encourage the imagination in ways needed for healthy development. Fortunately, among Melissa & Doug’s virtues is its track record of remaining relatively neutral on matters of politics and hot-button social topics. However, the company does earn points on the 2ndVote issues of Education and the Environment for sponsoring STEAM education programs and gaining the Forest Stewardship Council certification for sustainable means of production. This moderately neutral standing means that consumers can shop with Melissa & Doug and be at ease, knowing that their dollars aren’t supporting the latest greatest woke movement or corporate activism.

On the other hand, Hasbro (2.00), one of the toy world’s corporate giants, is a company to be avoided, if at all possible. Contrary to Melissa & Doug, Hasbro’s track record includes donations to United Way chapters that fund Planned Parenthood and support Common Core education standards, as well as a score of 100 on the HRC’s Corporate Equality Index. Despite having also contributed a comparatively small amount to The Salvation Army, that kind of activism just can’t earn the 2ndVote dollar.