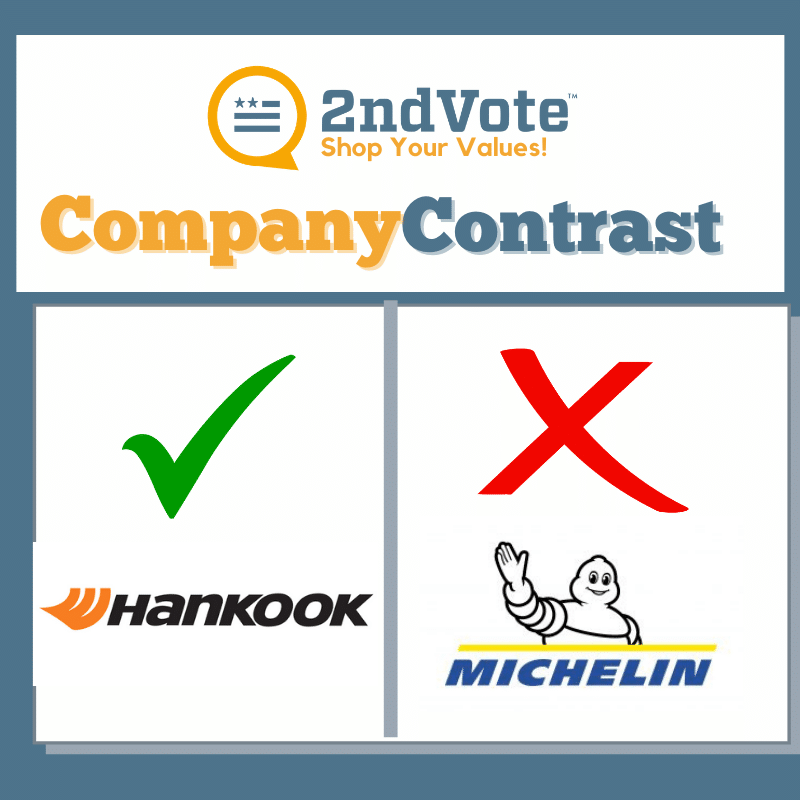 Each week 2ndVote takes a look at popular companies that either score poorly and then provides alternatives that better align with the 2ndVote values.  This series is called The Company Contrast, and the company we will be focusing on this week is Michelin Tires (2.67).

Founded in Clermont-Ferrand, France, in 1889, by brothers Édouard and André, Michelin began as a rubber factory that took to making tires in the early 1890s. By the 1930s, Michelin was operating large rubber factories internationally and designing new types of tires, including the radial tire which has become the standard tire design for most automobiles even to this day. Unfortunately, despite their innovation in the tire market, Michelin has also taken to occasional bouts of liberal activism. For promoting organizations that support the Equality Act, a piece of legislation that undermines religious liberty, Michelin is penalized on the 1st Amendment. An additional donation to a local United Way chapter also means deductions on Education for supporting those that support Common Core.

On the other hand, consumers in need of a new set of shoes for their car can turn to Hankook Tire & Technology Co. (3.15). Originating from and based in South Korea, Hankook provides OEM tires for various automakers and has recent heritage in international motorsport, even beating out Michelin as the tire of choice for the 2022 Formula E season. As for their philanthropy, sponsorship of The Salvation Army and participation in their Angel Tree program earn Hankook points on the issues of Life and the 1st Amendment, making them a great choice for the 2ndVote consumer.