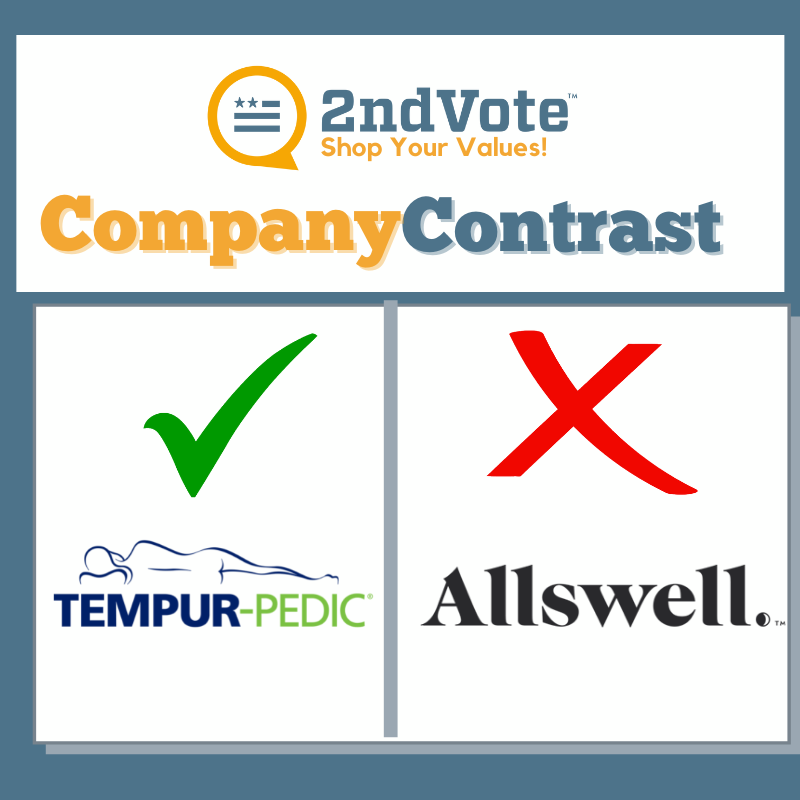 Posted at 14:53h in Basic Freedoms, Life, News by 2ndVote

Each week 2ndVote takes a look at popular companies that either score well or score poorly and then provides alternatives that either better align with the 2ndVote values or should be avoided to the best of your ability. This series is called The Company Contrast, and the company we will be focusing on this week is Tempur Sealy International (3.82).

Officially founded in 1992 as Tempur-Pedic, Inc., Tempur Sealy International’s famous “memory foam” mattress material was initially based on research conducted by NASA seeking to find a foam material for spacecraft seating that would increase survivability in the event of an accident. Just prior to its official founding, the first-ever Tempur mattress was unveiled by Swedish company, Fagerdala World Foams. Following a merger between Tempur-Pedic, Inc. and several of Fagerdala’s distributors, the company was rebranded to Tempur World Holding company and then reformed again into Tempur-Pedic International, Inc. Finally, in 2012, Tempur-Pedic acquired its chief competitor and formed the current company, Tempur-Sealy International. Fortunately, consumers can sleep well knowing that Tempur Sealy International focuses on the quality of its product rather than pursuing liberal activism. To the contrary, Tempur Sealy’s donations to adoption, foster care, and faith-based organizations earn them high marks on the issue of Life and Basic Freedoms for supporting abortion alternatives and religious groups. Additionally, several donations of mattresses to active duty, veterans, and first responder organizations mean they also score well on Border Security/Immigration. This makes Tempur Sealy a great choice for those in the market for a new mattress.

On the other hand, 2ndVote shoppers should avoid AllsWell (Walmart owned – 1.33) mattresses, which are a brand under the ownership of Walmart. It might be convenient to shop with the all-in-one retailer, but Walmart’s known liberal activism is sure to make for a restless night’s sleep.