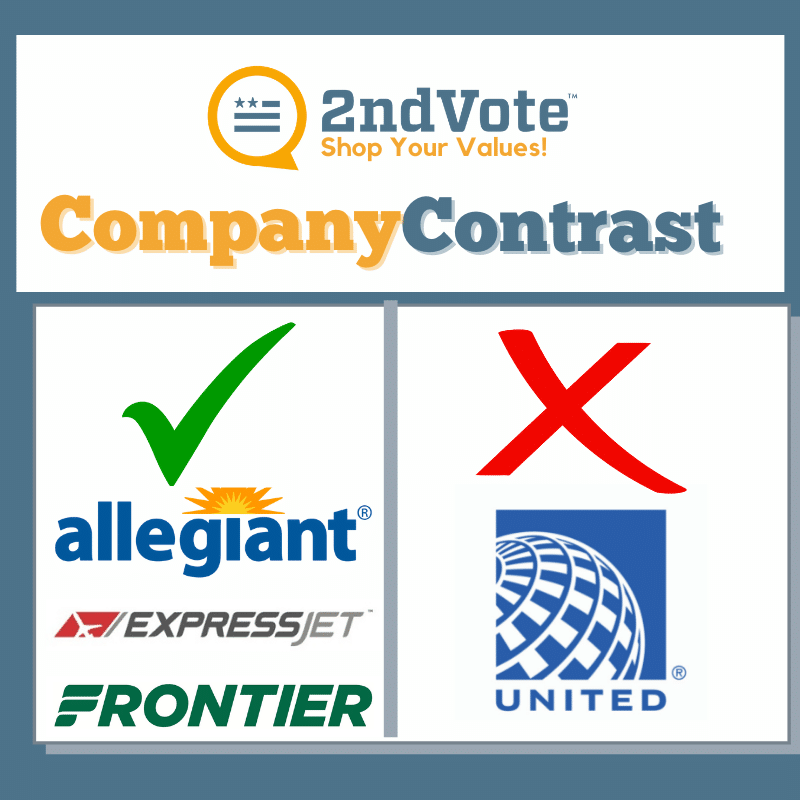 Each week 2ndVote takes a look at popular companies that score poorly and then provides alternatives that better align with your 2ndVote values. This series is called The Company Contrast, and the company we will be focusing on this week is United Airlines (2.00).

Founded in Boise, Idaho, in 1926, United Airlines can trace its roots all the way back to Varney Air Lines of Walter Varney’s namesake. Historically speaking, United Airlines, Inc. is the product of a long line of mergers and acquisitions, all starting with the merger between Boeing and Pratt & Whitney that formed the United Aircraft & Transport Corporation (UATC). In 1929, the UATC began purchasing smaller airlines, eventually conglomerating into United Airlines, Inc., the precursor to what we know today as United Airlines. Since then, the company has taken a rather leftist turn. As a member of several advocacy groups that both oppose RFRA policies and support the Equality Act, United Airlines has clearly taken a stance in opposition to religious liberty protections. But then again, their score of 100 on the HRC CEI is also a good indicator of those values. What’s worse is that they have even matched employee donations to Planned Parenthood. That said, United Airlines receives significant point deductions on the issues of Life, 1st Amendment (Basic Freedoms), and the 2nd Amendment.

On the other hand, Allegiant Air (3.00), Frontier Airlines (3.00), and ExpressJet (3.00) all offer cost-effective options that consumers can turn to in the face of other woke airline companies. With no relevant information found, all three airlines offer a neutral choice for 2ndVoters; a choice they can rest assured will prioritize service to their customers over activism.