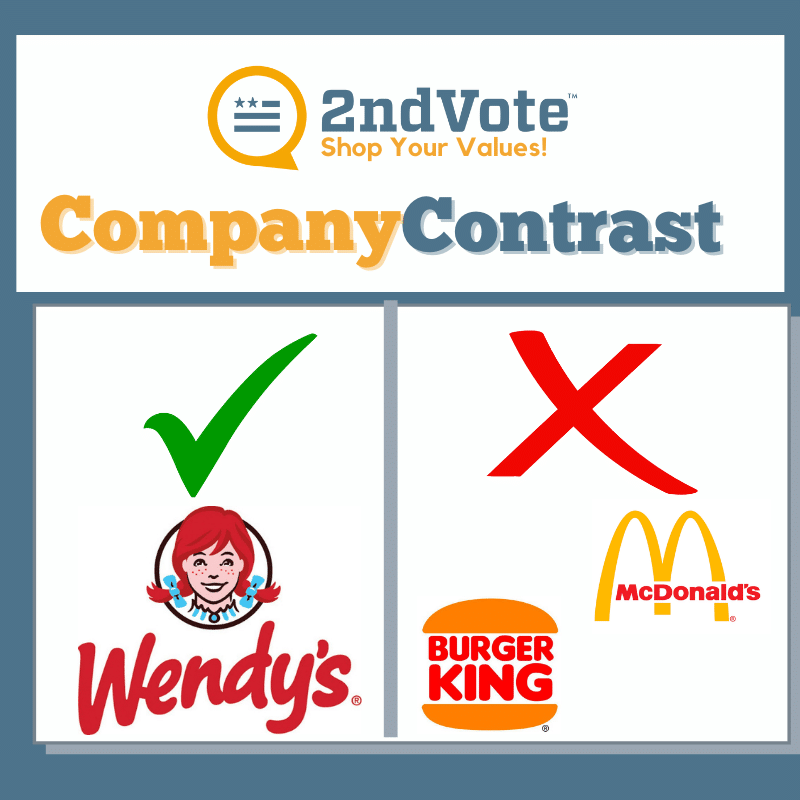 Posted at 13:08h in Basic Freedoms, Life, News by 2ndVote

Each week 2ndVote takes a look at popular companies that either score well or score poorly and then provides alternatives that either better align with the 2ndVote values or should be avoided to the best of your ability. This series is called The Company Contrast, and the company we will be focusing on this week is Wendy’s (The Wendy’s Company – 3.33).

Founded in Columbus, Ohio, in 1969 by Dave Thomas, and named after his daughter Melinda Lou “Wendy” Thomas, Wendy’s got its start as a product of inspiration. Thomas was such a fan of his hometown Kewpee Hamburgers in Kalamazoo, Michigan, that he modeled his own burgers after them, incorporating what has become a Wendy’s signature; the square burger patty. Although Wendy’s has been bought and sold between several holding companies over the years, it has still seen great success with over 6,700 locations in the U.S. and internationally. Fortunately, a recent update has found that Wendy’s philanthropy has taken a positive turn from neutral since last they were scored. Through donations totaling several hundreds of thousands of dollars to Catholic Charities and other Christian organizations, Wendy’s has earned high scores on the issues of Life and Basic Freedoms for supporting organizations with pro-life beliefs that are founded in faith. Unfortunately, Wendy’s has also earned a score of 100 from the HRC, one of the most prominent opponents to religious liberty protections, for having progressive company policies. This kind of contradiction certainly calls for consumer input, so be sure to let Wendy’s know that they still have a ways to go and improvements to make.

On the other hand, Wendy’s primary competition seems to have no issue playing on the liberal side of the fence. Both McDonald’s (1.33) and Burger King (2.67) earned scores below neutral. Although Burger King shares having a score of 100 from the HRC, McDonald’s is far worse, with various donations and sponsorships with leftist organizations on their record. Both should be avoided whenever possible.