In fact, Human Coalition’s outreach strategy is so effective, the pro-abortion left is desperate to block their work. And, tech companies like Twitter are all too willing accomplices in the censorship efforts.

Last month, Twitter barred these three Human Coalition ads from its platform marking the third time in recent months a pro-life organization has been censored: 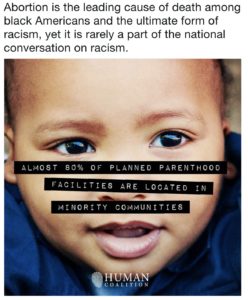 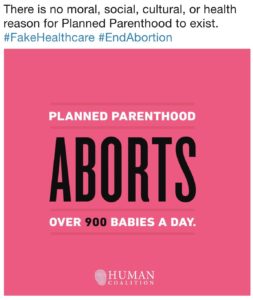 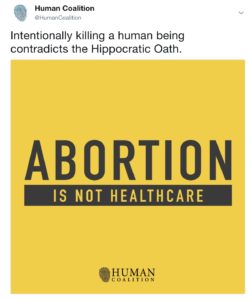 In 2017, Twitter demanded Live Action remove pro-life content and images from its website and SBA List’s video advertisement was blocked because it using the phrase “killing babies” to describe abortion.

Apparently, the pro-abortion left has been very effective at enlisting major tech companies to do their dirty work. Remember, Human Coalition’s prayer app was removed from the App Store after Apple caved to pressure from abortion activists.

Yet, Human Coalition’s work continues and they passed along a statement to 2ndVote earlier today:

This is a time of unprecedented censorship and suppression of pro-life voices. Between social media silencing, free speech battles pro-life clinics are fighting at the Supreme Court, and the abortion lobby’s constant disinformation campaigns against the work of pro-life advocates, we are reminded that darkness hates the light. With that in mind, we will stand firm in speaking truth, serving women, and rescuing children until the abortion genocide is ended and human rights are restored.

You can also stand firm in speaking truth with Human Coalition and 2ndVote by signing the petition here and by sending a message with us directly to Twitter: